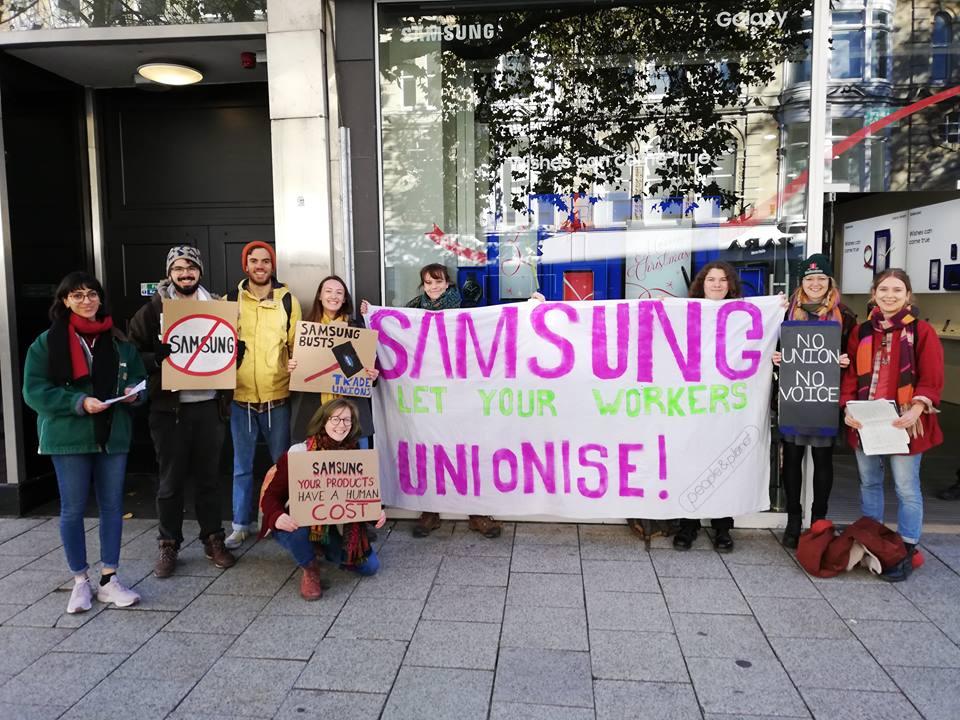 People & Planet groups across the country are participating in 48 Hours of Action this October, calling attention to union busting in Samsung and other major brands in the electronics industry. Kicking off in Cardiff outside the Samsung Experience Store on Queen Street, we filled the Welsh capitals streets with chants of “What do we want? Workers rights! When do we want them? Now!” and “Union busting? That’s disgusting!” whilst distributing flyers and collecting signatures for People & Planets petition asking Samsung to end their no-union policy. Signs with slogans such as “No Union, No Voice” and “Samsung – Your Products Have A Human Cost” were paraded proudly as members of the public posed for photographs and asked us questions about the companies actions. The protest was received well by the people of Cardiff, and we’re grateful for the support and enthusiasm they showed towards us.

It’s been a tumultuous year for Samsung, when back in Spring the company’s offices were raided and the head of Human Resources, Choi Pyeong-seok, was arrested on suspicion of union busting. So what is union busting? And why is it important?

Union busting is the practice of attempting, either by force or persuasion, to prevent the formation of trade unions. This can be either subtle or violent, and Samsung have faced countless allegations of bribery, blackmail and disciplinary action against their employees.

Unions are invaluable in an employment setting as they help to set the standards for wages, working conditions and quality of life for workers. They allow workers to voice complaints collectively and make it harder for companies to dismiss or ignore their concerns. They are also instrumental in taking employers to court for abuse or negligence of their employees. Without the right to unionise, Samsung workers are left vulnerable and at risk of exploitation.

The accounts of abuse by Samsung against their employees in electronics factories are many, particularly in South Korea and Vietnam where many of their products are made. There is concern around the use of chemicals within Samsung’s factories, also, and a definite lack of clarity surrounding which chemicals are being used where, exactly. This lack of transparency makes it incredibly difficult for workers who suffer illnesses as a result of exposure to these chemicals to prove that their ailments were caused by their work, and therefore get the compensation they deserve.

How can I help?

You can show your support for electronics factory workers demanding the freedom to unionise by signing this petition.

Or you can share a message of solidarity here.