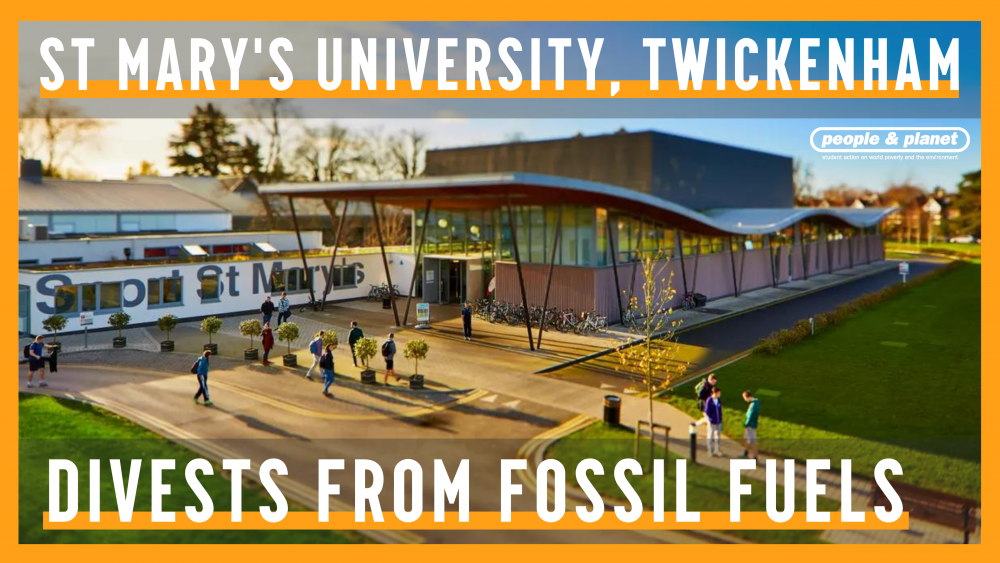 St Mary's University, Twickenham has become the 89th UK University to make a public commitment to divest from all fossil fuel companies. St Mary’s achieved this by adding their name to People & Planet and NUS’ Fossil Free Declaration, making them the 20th university to join the global divestment movement in this way.

The Declaration speaks to the importance of such a move in this year of COP26, calling out the fossil fuel industry as “a leading contributor to climate change - with just 100 companies responsible for 71% of global carbon emissions”. It highlights too how this act is one of “solidarity with the frontline and indigenous communities disproportionately impacted by both climate change and the extractivist projects of fossil fuel companies”.

St Mary’s University joins Newman University in Birmingham and several Catholic dioceses in England and Wales - Lancaster, Middlesbrough, Arundel & Brighton and Hallam - in announcing its commitment to divest from fossil fuel companies. The Diocese of Hallam, the latest Catholic diocese to divest from fossil fuels, announced its decision in May as part of a global divestment announcement for faith organisations coordinated by Operation Noah, the Global Catholic Climate Movement and other partners.

This announcement comes as the spotlight shines once more on the London School of Economics and Political Science (the ‘LSE’). The LSE made a partial commitment to divest from coal and tar sands in 2015 but has yet to expand it to a full rejection of all fossil fuel companies in spite of the escalating climate crisis. The LSE is estimated to have nearly £13 million in fossil fuel companies.

In a public statement, Anthony McClaran, the Vice-Chancellor of St Mary’s University, Twickenham said: “As Pope Francis has reminded us in his powerful encyclical Laudato Si’, we all have a part to play in caring for our common home and building a greener, sustainable future. I am proud that we at St Mary’s are making this commitment today.”

Laura Clayson, Co-Director: Climate Campaigns at People & Planet said: “it is incredible to see St Mary’s University, Twickenham reject an industry that bears such responsibility for the climate crisis. Importantly, in every act of divestment is support for the frontline and Indigenous communities leading the resistance against fossil fuel extraction, from Alberta, Canada to the Niger Delta, Nigeria.

As we inch closer to COP26 it is essential that the LSE follow their lead and announce a full divestment commitment. With nearly £13 million in fossil fuels students see straight through their professed ambition “to be the leading social science university with the greatest global impact.” We are sure that supporting an industry so complicit in the climate crisis, violations of Indigenous rights and climate science denial is not the “global impact” they’re aspiring to with their rhetoric. The LSE must act on student demands to divest the rest”.

Arthur Krön, from the LSE Divestment Alliance, said: “The LSE Divestment Alliance has made significant progress this year securing a commitment to a working group tasked with updating the outdated Socially Responsible Investment Policy, the release of information on LSE's holdings and the competition of a Transition Pathway Initiative Analysis. Yet, the lack of clear divestment and impact investment commitments from LSE is worrying. This issue cannot get lost in the labyrinth of LSE bureaucracy. LSE remains one of very few prominent UK universities that has not yet committed to divestment from fossil fuels, various forms of armaments and other unethical investments. As an institution that prides itself with social impact and cutting-edge research on climate change policy and peace, this lack of institutional accountability is shameful and alienating for a lot of students who pursue social science degrees to have a positive impact on the world.”

James Buchanan, Bright Now Campaign Manager at the Christian climate charity Operation Noah, said: "It is wonderful news that St Mary's University has taken the significant step of divesting from fossil fuel companies in response to the climate crisis - joining more than 200 Catholic institutions around the world in doing so. As the UK prepares to host the UN climate talks later this year, we encourage all Catholic dioceses and religious orders to follow the Vatican recommendation to divest from fossil fuel companies and invest in solutions to the climate crisis."