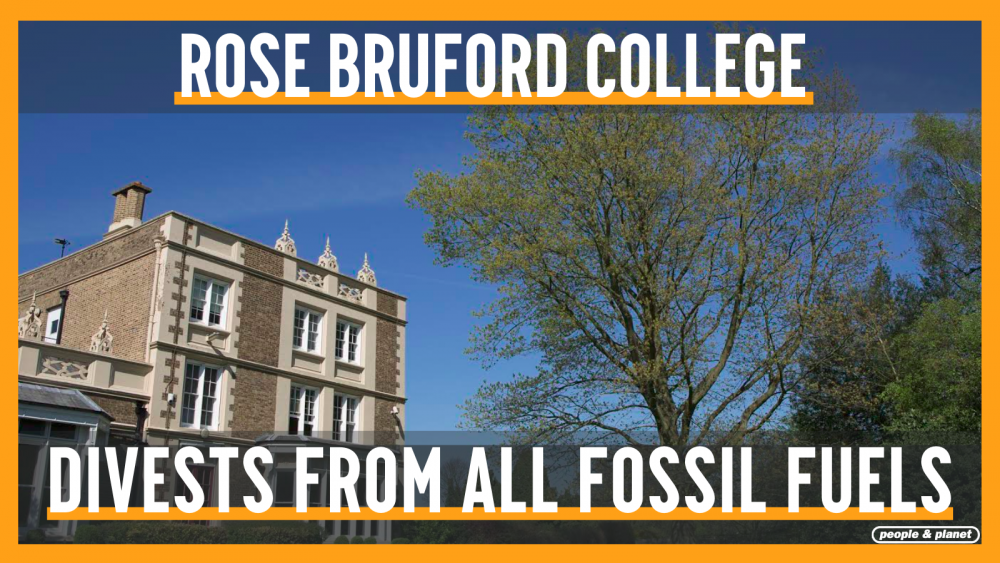 Today Rose Bruford College announces its full divestment from the fossil fuel industry, becoming the first specialist drama school in the UK to make the commitment. The college made the public commitment by becoming the latest signatory to People & Planet and the National Union of Students’ Fossil Free Declaration.

As a result of student-led campaigning, Rose Bruford College has become the 96th UK university to commit to divestment from all fossil fuels, and the 22nd institution to make this commitment through the Fossil Free Declaration. In signing the Declaration, Rose Bruford not only affirms its current status as a Fossil Free institution, but makes a vital commitment to excluding the fossil fuel industry from all future investments.

Over 60% of UK universities have divested from fossil fuels companies in acknowledgement of their duty to consider social and environmental impact in addition to profit when making investments. Student campaigners are now calling on the university to divest from border industry companies that enable the exclusion, surveillance and detention of migrating people in the UK and worldwide. The campaign, Divest Borders, highlights the growing role of the border security and surveillance industry in profiting from climate displacement and war. Divest Borders is a UK-wide student campaign and has already won endorsement from student unions across England and Scotland.

Laura Clayson, Climate Campaigns Manager at People & Planet, said: “It’s always incredible to see the hard work of students in the People & Planet network come to fruition and none more so than when it leads to the first commitment of its kind! Specialist institutions have a pivotal role to play in the societal shift away from companies complicit in the multiple crises taking place across the globe - from the climate to the cost of living - with theatre and the performing arts creating space for experimenting with and building alternative worlds and visions of the future.

It’s reassuring that Rose Bruford College has taken action in line with building towards a Fossil Free future.  We look forward to Rose Bruford adding investment exclusions for the border industry next, in acknowledgement of the intersecting injustices of the impacts of the climate crisis and the private companies profiteering from the UK’s hostile environment towards those who move.”

Natasha Pavey, Environment and Ethics Officer at Rose Bruford Students’ Union, said: “I am over the moon that Rose Bruford has signed the Fossil Free Declaration. As the Student Union Environment & Ethics Officer, I've spent the year lobbying the college to sign the declaration. Why? Because I am terrified. We are studying for a future that is threatened by the climate crisis. Committing to remain fossil free and avoid one of the biggest contributors to the climate crisis is a brilliant step in the right direction for Rose Bruford.

I am proud that Rose Bruford has become the first drama school to sign the declaration, leading the way for performing arts institutions across the country and starting wider conversations around climate and social justice. This is a brilliant start for Rose Bruford, and with a new year looming I hope to bring a People & Planet student team together to encourage Rose Bruford to deepen their commitment to justice by severing ties with the border industry next."

Clarie Middleton, Principal and CEO of Rose Bruford College, said: "Rose Bruford College is delighted to have signed up to the Fossil Free Declaration, joining over 60% of the UK's universities in divesting from fossil fuels and taking action to help prevent future climate change."

Rose Bruford College is the first specialist drama school to make a Fossil Free commitment. Whilst the University of the Arts London made a commitment to full divestment in October 2015, the university covers a wider range of specialisms, including design and fashion as well as fine art. University of the Arts London also no longer has an operational drama centre, as it closed in March 2020. Rose Bruford College focuses solely on theatre and performance.