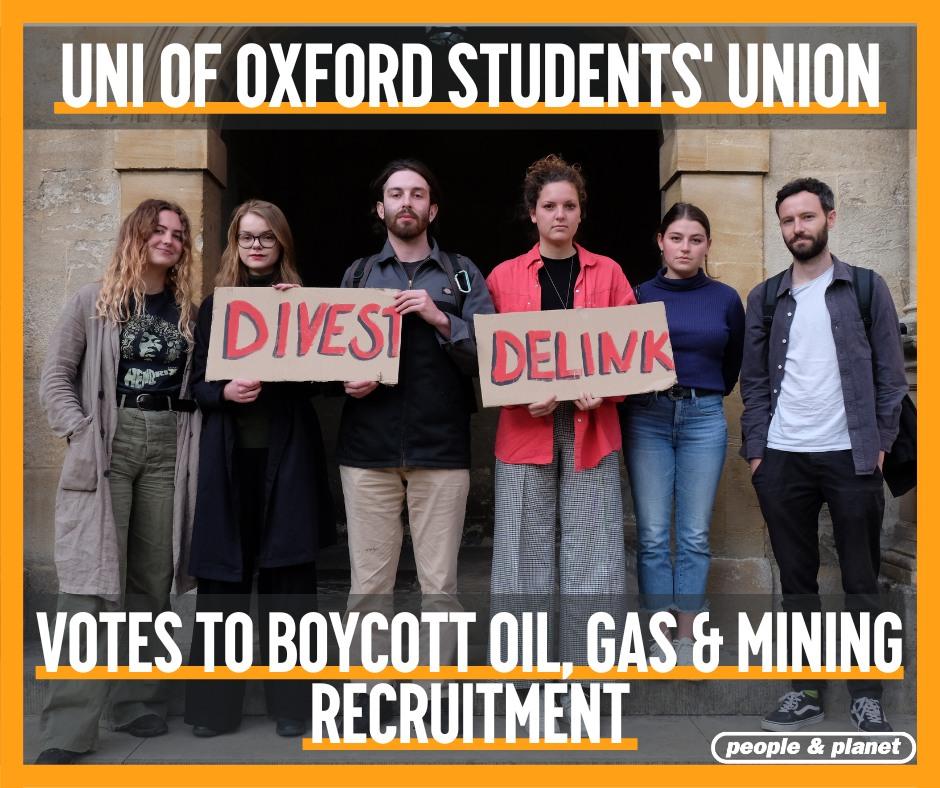 The Oxford University Students Union has voted to boycott recruitment events which feature oil, gas, and mining companies. It joins the student unions at Bristol, Sussex, Edinburgh, Sheffield, Surrey who have all passed similar motions in support of the Fossil Free Careers campaign, coordinated by student campaigning charity People & Planet. The campaign has also been backed by the UK's largest student and staff bodies: the National Union of Students and the University & College Union.

Thanks to a motion passed at student council, Oxford SU will now officially support the student-led campaign calling for the Oxford Careers Service to end all its relationships with the oil, gas, and mining industries. The union will also exclude oil, gas, and mining companies access to Student Union spaces, and will not endorse any recruitment event where they feature.

The motion was proposed by students from the Oxford Climate Justice Campaign, who won landmark concessions from the university on divestment from fossil fuels in 2020. Students are now demanding that the university careers service implements an Ethical Careers Policy which would exclude the oil, gas, and mining industries from all recruitment activities, such as careers fairs and exclusive networking events. The group began campaigning around the Oxford University Careers Service in January 2019 when it released a petition titled 'End Fossil Fuel Recruitment Events - University of Oxford'.

“We are so pleased to have the backing of the Students Union on our campaign. Across Oxford, students are united: we want Oxford to do the right thing and cut all ties with the industries that are most responsible for the climate crisis.”

“The movement for Fossil Free Careers is snowballing faster than we ever thought possible, with student union after student union backing the campaign and boycotting extractive industry recruitment. It’s disgraceful that the University of Oxford continues to maintain close ties with these corporate planet-wreckers, and we look forward to seeing what students will do next.”