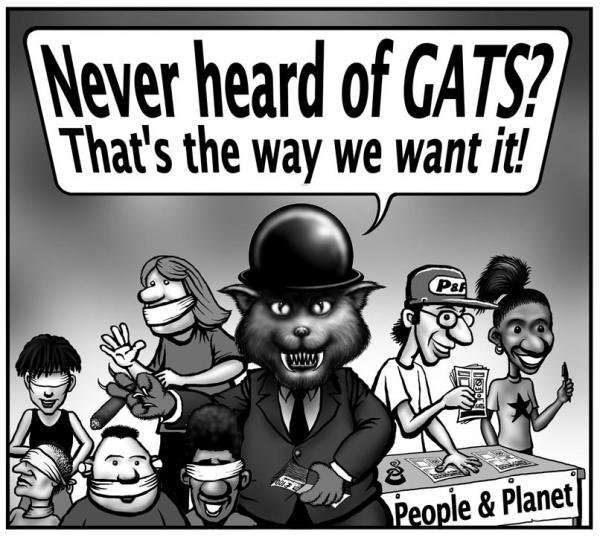 The government and EU conceded to the demands of our Defend Education - Stop GATS campaign by deciding not to include higher education in the profit-driven free trade treaty.

Later we would learn what a huge impact our campaigning actually since there were more submissions on education than any other issue! The government concluded: “in the light of the comments received, the EC’s offer includes no new commitments in educational services.” In other words: they admit we won the argument.

The General Agreement on Trade in Services (GATS) was being negotiated in the World Trade Organisation (WTO). Launched in 2000, the negotiations would conclude at the end of 2004. Higher Education was one of the many service sectors which some countries want to see covered by binding free trade rules, which would have opened it up to foreign competition by removing `barriers´ to free trade such as government regulations and subsidies.

In-depth research by People & Planet revealed that GATS would impose binding and effectively irreversible free-market rules on our Higher Education system. This would plunge universities into fierce competition in the global marketplace and could result in much higher fees, the closure of `unprofitable´ courses, lower quality, and threats to academic freedom. Higher Education is still in danger because the GATS treaty has an in-built commitment to keep expanding its reach to ever more services.

Guy Hughes, Head of Campaigns at People & Planet, added: “This victory needs to be put in context. Vital services in poor countries and the EU are still being aggressively targeted to be opened up for exploitation by big business through the current negotiations. Higher Education, and all other vital services worldwide, will not be permanently protected unless GATS either collapses or is completely rewritten.”