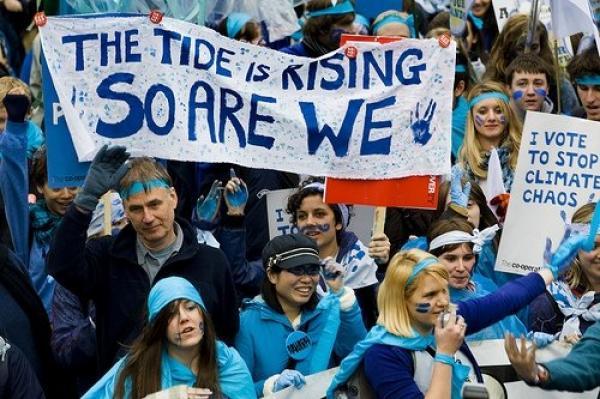 Thousands of young people joined The Wave protests in 2009 demanding tough action on climate change. As the historic UN climate talks opened in Copenhagen, young people called for “Climate Justice”. People & Planet students traveled from all over the country to attend from schools, colleges and universities. They led the march in mass “flashdances” and rolled a giant Wave machine through the streets of London.

Over 50,000 people dressed in blue flooded the streets of London and encircled parliament. There were Waves of people power on the same day across the UK and Ireland, with 13,000 people joining The Wave in Glasgow to make history in Scotland too. They came together to call on the UK to act fair and fast and protect the world’s poorest when negotiating a global climate treaty at the UN negotiations which open today.

"I thought the Wave was amazing as it was my first time taking part in a public demonstration. It was really exciting and eye opening to see the extent you have to go through to make a point and also the amount of people that showed up which was brilliant! The Wave also showed me how people can stand up for what they believe and actually get up and do something." Tonye Babudoh, 17, from the People & Planet group at City Islington College