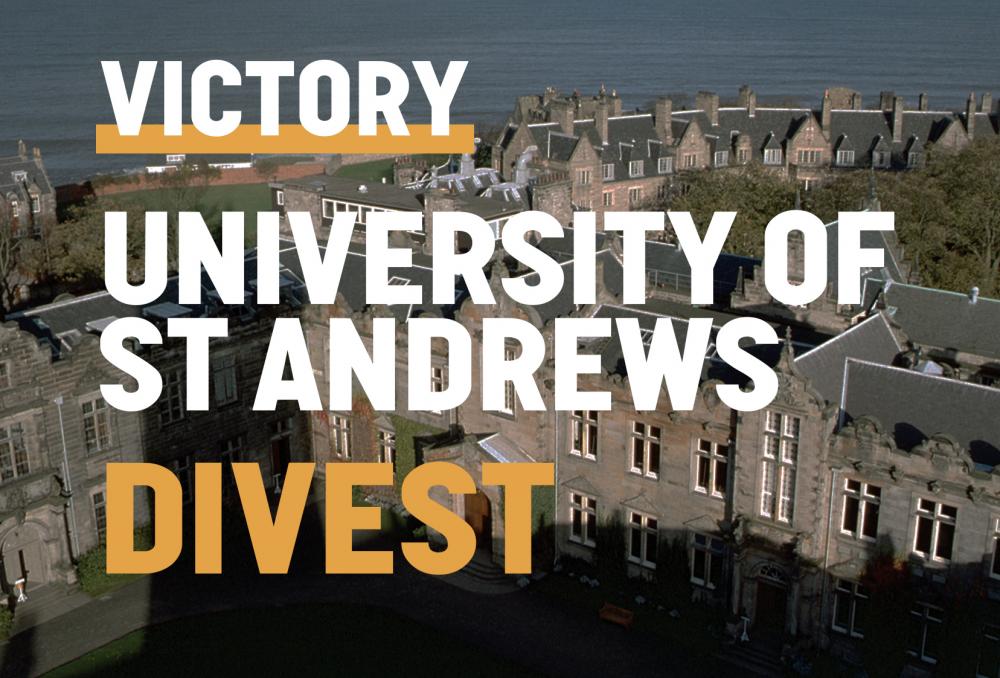 St Andrews doesn’t do protests. The normally polite town had its first
large protest of the academic year on 30 January when a couple of
hundred protesters marched through the town to protest Donald Trump’s
immigration ban. One of the signs read; “You know it’s bad when it’s
protested in St Andrews” emphasising the placid nature of the student
body.

Old institutions are, by their nature, reluctant to change and so when
Fossil Free St Andrews was launched in March 2016 it was met with
suspicion and hostility. The organisers were told that problems are
usually handled over email. This was an early tactic but proved to be
a cul-de-sac of bureaucracy. Inspiration was taken from a student
campaign at the university dating back to 2006. This pioneering and
popular movement aimed to pressure the university to withdraw its
investments from arms manufacturers and companies employing child
labour. This led to the creation of a Sustainable Investment Policy in
2007 becoming the first university to do so.

With such a heritage, we adopted our predecessor’s strategy of
petition based protest and legal suit. Almost 600 students, faculty
and alumni have signed our petition. This is no small feat as the
student body numbers less than 8,000. Notice was taken by The Saint
and The Courier. Even our Royal Alumni were reached out to for
support. A motion was submitted and passed by the Student’s
Representative Council in support of the divestment campaign at their
first meeting in September. We were gearing up for a final push to get
the university to divest when it transpired that they had . . . back
in May 2016! This shocked us all as we were in contact with the
finance office and SU council but no one seemed to be aware that it
had occurred. We later discovered that the two investment funds St
Andrews was invested in had actually divested rather than the
University acting out its own desires.

The University did not make a conscious decision to divest but were
rather recipients of the tides of change. We capitalised on this with
our announcement on Valentine’s Day last. Even though it is not by
design it is a momentous moment for a University aiming to be the
world’s first carbon neutral third level institution. To further this
ambition, they have electrified a portion of their estates fleet,
constructed a biomass heat generation facility at Guardbridge and are
constructing a wind farm at Kenly.

Our next step is to submit a motion to amend the SIP to include a
prohibition on investing in fossil fuel extraction companies to the
University Court for a vote on the 7th April. It is important that
this step forward can never be reversed.