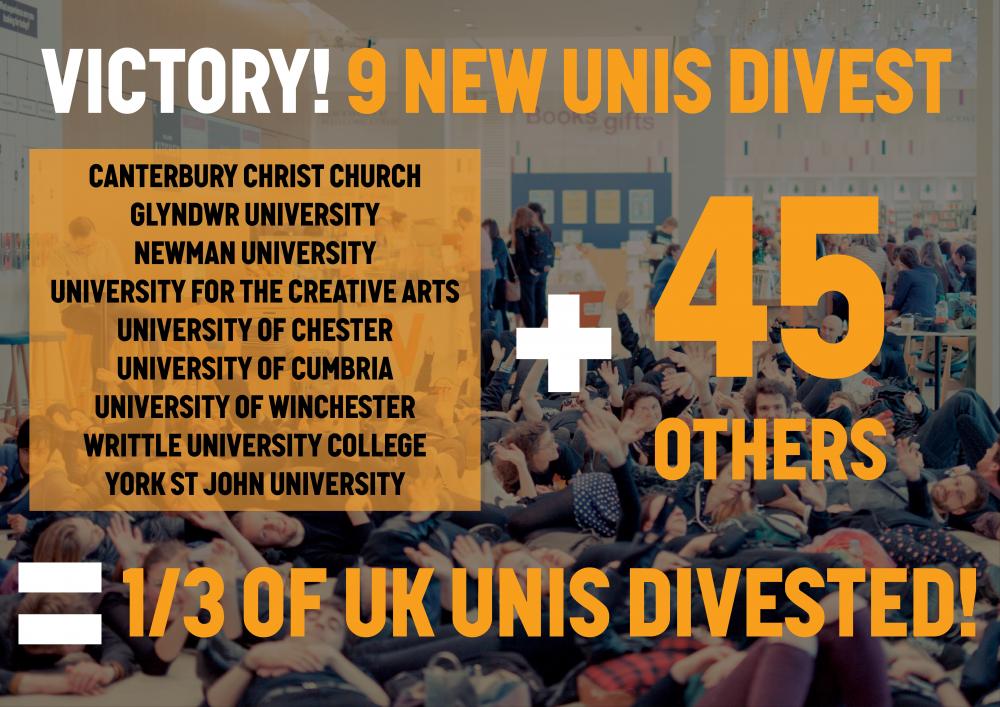 The Fossil Fuel Declaration was composed jointly by People & Planet and NUS. In signing the declaration, universities commit to never investing in fossil fuels, stating that they have a duty to safeguard all students - present and future, including those from communities in the Global South who face the worst impacts of climate change.

Professor Tim Wheeler, Vice-Chancellor, University of Chester said: ‘Universities exist for the public good, from conducting life-changing research to educating the global citizens and leaders of tomorrow, and they are also at the forefront of climate change research. We have students studying with us from across the world, many of whom come from communities who are already feeling the effects of, and are on, the front lines of climate change. We want to protect the future of all of our students – current and future, locally and globally.’

There have been discussions on whether universities should divest on over one hundred campuses. At seventy eight of these institutions discussions have reached the level of senior management. Campaigners believe that by the end of the 2017/18 academic year over half of UK universities will have fossil free commitments in place.

Over 50% of Russell Group universities have taken action to exclude fossil fuel companies from their investment portfolios, alongside a third of post-92 institutions and over a quarter of the former 94 group. Across each of these groups commitments to screen out all fossil fuel companies makes up the majority of commitment types we see.

Andrew Taylor, Co-Director Campaigns and Communication, People & Planet said: ‘The richest universities in the UK are turning their backs on fossil fuel companies like BP and Shell. So are some of the least wealthy. This shows that across the sector there is a strong desire to be on the right side of history when it comes to climate justice.’

Michael Kind, the outgoing SU Development Officer at Sheffield Students' Union said: ‘Sheffield has invested approximately £937k in two large UK renewable energy companies. Following on from the November 2015 announcement that they would be divesting from fossil fuels, our University is making a noteworthy contribution to the financial and social viability of renewable energy, and unviability of fossil fuels.’

As reinvestment discussions become more of a focus at institutions committing to divest from fossil fuels students are pushing for options that facilitate their direct participation in the just transition to a low-carbon world. This is through opening up dialogue about how to create a more democratic energy system and include such solutions as community energy initiatives on campus.

At the time of the College of the Marshall Islands student campaigner Kathy Jetnil-Kijiner said: ‘Everyone likes to say the Pacific is small – but it’s not. Our ocean that connects us is as vast as our people and our histories. While the landmass of our islands themselves may seem small, businesses for the banks here is profitable and growing. It’s a moral imperative that as banks continue to grow in the region they must side with the people, not the polluters.’ (Kathy Jetnil-Kijiner, 2014).

For more in depth analysis of the state of the higher education sector and fossil fuel divestment, see this Times Higher Education article: https://www.timeshighereducation.com/news/university-fossil-fuel-divestment-total-tips-ps80-billion-globally