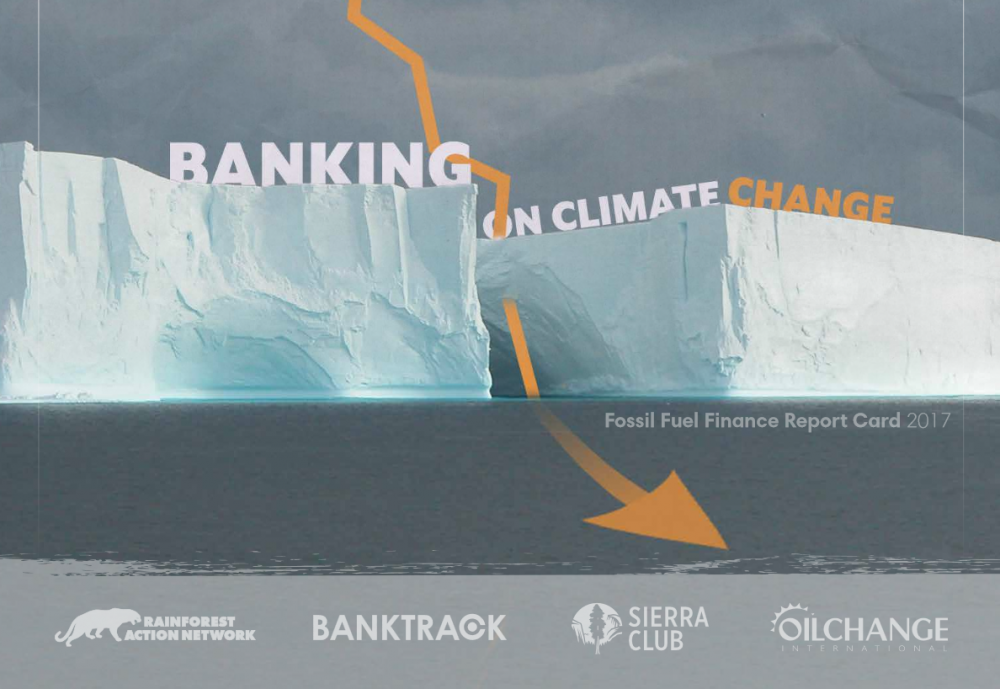 The UK’s top banks are still failing to stamp out their financing for coal projects, trailing some way behind many European and US banks which have introduced policies aimed at cutting ties to the most climate destructive energy sector. This is one of the findings of the Fossil Fuel Finance Report Card 2017, recently published by BankTrack, Rainforest Action Network, Oil Change International and Sierra Club, which this year graded the policy coverage of 37 international banks to show the extent to which big finance is striving – and in many ways still failing – to curb multi-billion investments for various high carbon energy sectors.

Barclays, HSBC, RBS and Standard Chartered were the four UK banks under review, and before taking a look at how these institutions continue to disappoint in their approach to coal financing, it’s worth laying out the scale of the problem – in hard cash terms.

Despite this showing, a quote from an HSBC spokesman in The Guardian’s report card coverage, only disappoints: “Dangerous levels of climate change will only be avoided by society working together, and governments, businesses, communities and civil society share a common goal. The finance sector has an important role and HSBC will play its full part in the critical transition to a low-carbon economy.” The problem with this, as campaigners have pointed out before, is that this “critical transition” now has to happen very rapidly, and with more finance for coal, HSBC is not “playing its full part” but pushing in the opposite direction.

HSBC does deserve credit for announcing an end to its financing of all new coal mine projects around the world, late last year. In policy terms, coal mining exclusion is the lowest hanging fruit for international banks – 14 have now committed to no longer finance such projects, among them Standard Chartered. Barclays and RBS have unfortunately not yet chosen to do likewise.

What we do have from Barclays is a commitment to reduce its lending exposure to coal mining companies. A similar piecemeal approach has so far been taken by RBS: it will no longer finance companies which earn more than 65% of their revenues from coal. Many huge diversified climate offenders, though, rake in less than 65% of their revenues from coal while mining huge amounts – and these can still reach out to RBS for financial support. Significantly, though, RBS lending volumes for coal and the other fossil fuel sectors we assessed are declining across the board. Which begs the question: why is RBS bothering, when its coal mining financing is close to drying up, with this 65% threshold rather than simply pulling out of this sector for good?

It’s when we come to the financing of coal power plants that we see the most troubling gaps in UK banks’ efforts to – as they shout about regularly – contribute to global action on climate change. Again, we have seen significant movement from 11 European and US banks which have now declared an end to project financing for all new coal plant projects around the world. Yet none of the UK banks have matched this, opting instead for partial exclusions.

This allows the UK banks to continue actively supporting coal power expansion in developing countries. For example, HSBC and Standard Chartered are both involved in proposed Vietnamese coal plants which may advance later this year, including the Nam Dinh 1 coal plant project, which may be signed off for financing by Standard Chartered and others in the next few weeks, or the Vinh Tan 3 coal plant project later this year. And determination to reduce exposure to coal power companies is also sorely lacking – only RBS has committed to reduce its lending to thermal coal players year-on-year.

UK banks’ determination to keep going with health- and climate-busting coal power investments is also in stark contrast to what we have seen from French banks in the last couple of years, where the likes of Crédit Agricole and Société Générale have been prepared to pull out of developing world coal plants including the TJB2 and Cirebon 2 projects in Indonesia. 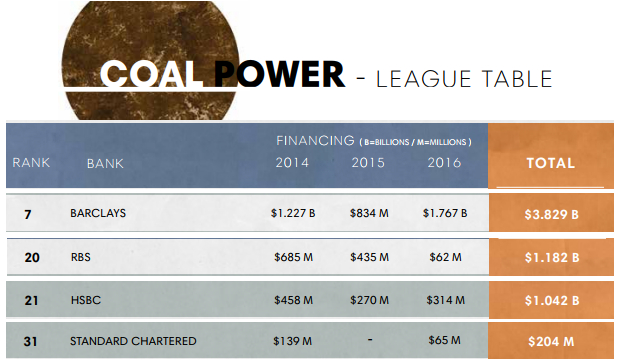 So, in 2016, the calendar year following the establishment of the Paris climate agreement, the UK’s two biggest banks boosted their support for smoke-belching coal plants. And this after both banks signed the Paris Pledge for Action to “demonstrate that they are ready to play their part” in supporting that agreement. It’s simply not good enough. The excuses have to stop, and decisive action to kick coal out of UK bank portfolios for good needs to happen very soon.