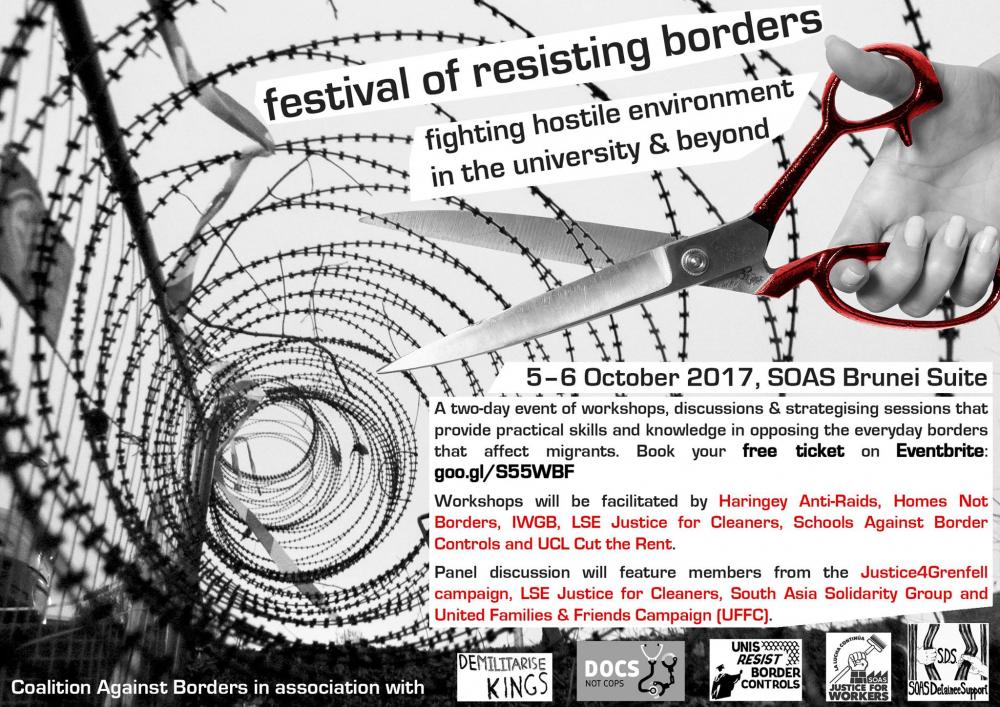 Since March, a consortium of grassroots anti-racist, migrant-rights and labour rights groups calling ourselves, Coalition Against Borders that is made up of Demilitarise King’s, Docs Not Cops, SOAS Detainee Support, SOAS Justice For Workers, and Unis Resist Border Controls (URBC) have been in communication. As we have seen in the past few months, Prime Minister Theresa May's 'hostile environment'- a policy that she enacted while as Home Office Secretary, has become law that as Corporate Watch has commented, has turned British citizens into a ‘nation of border cops.” Now immigration checks and raids have become intensified, with checks being carried out in train and bus stations, inside the NHS, in businesses, in schools, with the police, in private housing, and also inside universities creating untold precarity and violence against both documented and undocumented migrants. As we saw from the #PatientsNotPassports action organised by Docs Not Cops, the Conservative government is using migrants as a convenient scapegoat to further racist and xenophobic precarity and their continued austerity policy that is defunding the NHS. Meanwhile the hostile environment policy inside the NHS is increasing. On the 23rd October it will be a mandatory policy for NHS staff to conduct passport checks on migrant patients.

We sensed the urgent need to create an event that would help alert and guide new and continuing students into understanding and organising with us in opposing the hostile environment policy and workplace exploitation against migrants. We also wanted to introduce new and continuing students to anti-racists, anti-borders groups, and unions that support the struggles of migrants. This Coalition Against Borders is an emergent, fluid and loose group of organisations and activists united in our urgent endeavour to amplify each other’s forces against the hostile environment policy and migrant labour precarity.

With the help of the SOAS Students’ Union, the Coalition Against Borders is convening a 2-days long Festival of Resisting Borders: Fighting Hostile Environment in the University & Beyond on the 5-6 October 2017 during Black History Month at SOAS Russell Square campus. Over the two days, there will be workshops run by different grassroots campaigns around the following themes: (A) Resisting the Hostile Environment and Surveillance in Education, Health, Everyday Life and (B) Migrant Workers Organising Against Labour Precarity. On Friday 6th October, there will also be an Social Justice Fayr from 12pm-5pm with stalls run by organisations involved in disability rights, sex worker rights, police and state violence and opposing the arms trade from across London, as well as a closing panel discussion, entitled “No Borders! No White Supremacy!” with member from Justice4Grenfell, LSE Justice for Cleaners, SOAS Justice For Workers, South Asia Solidarity Group and United Families and Friends Campaign participating.

This is a free event open to migrants, activists, students, university staff, and allies. Reserve your place via Eventbrite at: https://www.eventbrite.co.uk/e/festival-of-resisting-borders-fighting-hostile-environment-in-the-university-beyond-tickets-37480874304

Follow the Festival of Resisting Borders: Fighting Hostile Environment in the University and Beyond at #FRB2017.