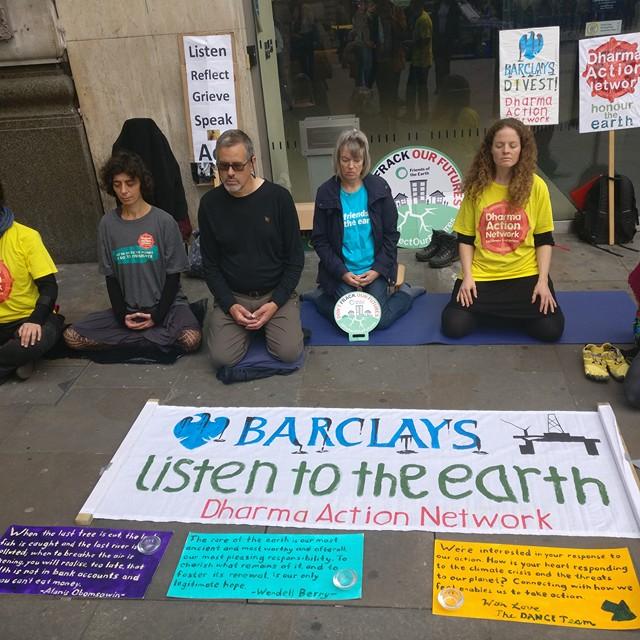 What is Dharma Action Network for Climate Engagement (DANCE)?

DANCE are a network of meditation practitioners from the Buddhist tradition who are deeply concerned about the climate crisis.

DANCE grew out of a discussion between Dharma teachers at Gaia House, a meditation retreat centre in Devon. They recognised that one of the results of  sustained mindfulness meditation is to sensitize people to the pain and the joy that characterizes our world. They wanted to give meditators an avenue to express this through action on the urgent issue of climate change.

Meditation erodes the apparent division between the small sense of individual self and things we would usually see as part of the ‘outside’ world.  Events we might otherwise see as happening at a distance or not part of our personal world - the impacts of climate change for example - feel very immediate, real and urgent. For me, taking action from this sense of interconnectedness with the world is empowering, rooted and sustaining. Nevertheless, Buddhist practitioners have been slow to react to the urgent issues of our time for various reasons. DANCE hope to encourage the Dharma community to bring the Buddhist perspective, perhaps particularly the attitude of compassion and deep listening, to the activist movement.

What is DANCE doing?

DANCE have recently joined the fracking front lines in Lancashire, held a monthly vigil outside the Shell Centre, and are also supporting activists in their work, for example at a national gathering of Friends of the Earth.

At our vigil on Saturday outside Barclays bank in Piccadilly London, we started with a gathering at nearby Golden Square. This was the third time we were outside Barclays telling them to hear the clear and present danger signals coming from our planet, and to stop profiting from investment in fossil fuels.

We started by inviting each member of the group to say something about what moved them to give up time and energy to come to the action. This re- connected us to our personal inspiration and helped to bring the group closer. We then did a slow silent walking meditation to the bank. This walking really slowly thing is a pretty weird thing to do in the usual rush of London streets and we got a lot of attention from passers-by (which is everyone when you are going this slowly). On arrival at the bank we took out our banner ‘Barclays: Listen to the Earth!’ and quietly organised into a line of meditators outside the door. I handed out leaflets and met a woman who had never heard of climate change and of course the man who thought it was all too late...

A line of folks sitting on the ground quietly with eyes closed is quite striking visually and there was a lot of curiosity about what we were doing. To me it communicates both vulnerability and deep listening. Most people were very positive and some were impressed. We kept getting money when what our pot for was actually written comments but you have to take what you are given... (one time I got a cheese sandwich!).

We walked back to the square as mindfully as we had arrived, and once back in the square again shared our personal responses. Everyone felt inspired and wanted to do more. We sat on the grass, ate vegan food and shared chocolate and some ideas about our next action.

We will be posting our next action on Facebook. Hope you can join us - no meditation experience required!