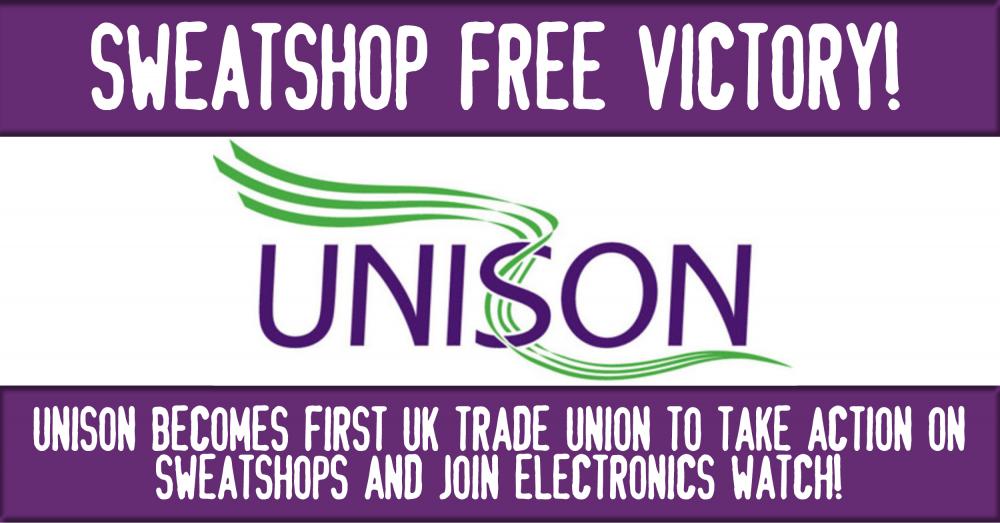 UNISON becomes first UK Trade Union to challenge sweatshops in their own supply chain, Who will be next?

Public service union UNISON  became the first trade union in the UK to ensure the electronics they purchase are independently monitored for workers’ rights violations. UNISON joins a growing number of institutions in Europe that have affiliated to Electronics Watch, an independent monitoring organisation that assists institutions in the public sector to improve pay and conditions for those who manufacture the goods they buy.

Affiliation to Electronics Watch enables institutions to use their market influence to effect change in their supply chains. Through affiliating, institutions commit to writing basic standards of human rights into their contracts with ICT brands – standards which are then monitored for compliance by Electronics Watch, which works with civil society organisations in the factory locations to assess working conditions. As the first affiliate outside the public sector, UNISON is participating in a ‘pilot scheme’ to evaluate the value of Electronics Watch for not-for-profit civil society organisations and trade unions that buy significant amounts of ICT hardware products.

Gill Blaik, of UNISON said: “We are very pleased to be the first trade union to affiliate to Electronics Watch. UNISON works to defend trade union and human rights globally and affiliating to Electronics Watch is a natural step as part this and also our procurement policy. IT supply chains are complex and we know there is much work needed to improve the working conditions of those employed in the electronics industry. We want our suppliers to ensure their workers have decent working conditions and are free from labour and human rights abuses.”

More than 50 UK organisations have now joined Electronics Watch, either directly, or through their purchasing consortia, including the University of Durham, Tower Hamlets Borough Council and Transport For London. Students at the University of Cardiff are hoping that their institution might be the next to join.

Jake and Frida from People and Planet at Cardiff tells us why they started the Sweatshop Free Campaign at Cardiff. “Cardiff University spends over £3 million a year on electronics. Universities are public bodies which spend loads of money on electronics and should be accountable to us, the students. We want to make sure Cardiff University listens to us and spends it’s money in a responsible way that protects workers’ rights, by joining Electronics Watch.

Companies like Samsung and Apple, which make billions in profits annually, have been found to have severe abuses of workers rights from within their supply chains and Cardiff University buys millions from these companies. Considering the size and influence of these companies and the amount that Cardiff spends on electronics equipment every year, helping the workers in these factories can seem a very difficult task but Electronics Watch offers a practicable and achievable solution for Cardiff. We hope the university of Cardiff it see it the same way.

Over the last decade, a number of high profile worker rights abuses have been revealed in the electronics industry. Last year, The Guardian exposed extensive exploitation of migrant workers in Malaysia, with recruitment fees of up to £1,000 and allegations of workers’ passports being confiscated. Reports have estimated that 76 workers have died as a result of toxic chemical exposure in Samsung factories in South Korea.