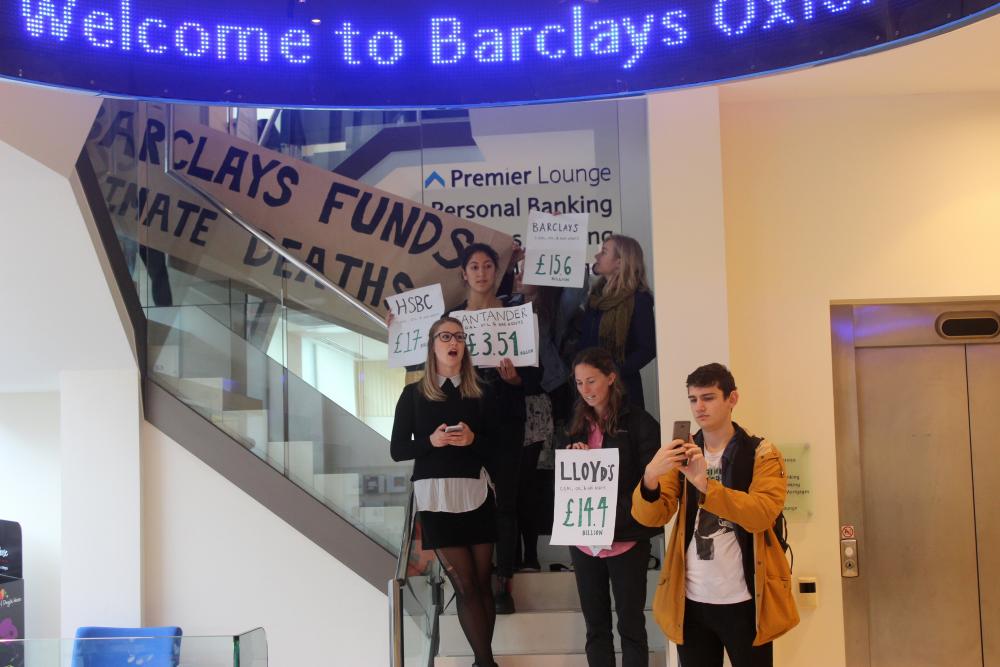 This morning (October 24), we held a peaceful demonstration in Barclay’s bank on Cornmarket Street. Our group of students from the University of Oxford and members of the city joined an international effort to demand banks to stop funding fossil fuel expansion projects, “before it is too late”.

Barclays, specifically has invested £48 million in Kinder Morgan, the largest pipeline company in North America and the corporation responsible for Trans Mountain, a pipeline to transport the least efficient, dirtiest oil out of the tar sands in Canada.

We flooded in and spoke at the bank this morning, listing our demands for Barclays:

“We are calling on Barclays Bank, which loans out £9.7bn to the fossil fuel industry, to cease all funding to new fossil fuel extraction and expansion projects. We call on Barclays to prioritize people over pipelines as they prepare to fund the expansion of the Trans Mountain pipeline in Canada. It is widely known among climate scientists that 80% of known reserves of fossil fuels need to stay in the ground, unburned, to avoid irrevocable global warming, mass deaths and global catastrophe. Barclay’s support of fossil fuel expansion projects are what Oxford school of Business scholars have classified as “stranded assets” given global limits on how much oil, coal and gas we can burn. Investments in fossil fuel expansion projects are not just unethical and dangerous for our children’s futures, but also risky investments for Barclays and those of us who bank with them.

As we make this demand, we stand in solidarity with a global, indigenous-led campaign that came out of the Standing Rock, in their call to action, the Mazaska Talks (“money talks” in the Lakota language). This action at Barclays Oxford will echo hundreds of others in over 40 cities around the world: October 23-25 are Mazaska Talks’ global days of action targeting banks that fund fossil fuels. #DivestTheGlobe #MazaskaTalks

This resistance campaign is working–– A few days ago, Kinder Morgan announced that construction is delayed due to these regulatory hurdles. The expansion of the Trans Mountain pipeline threatens indigenous sovereignty, water, land. The existing pipeline has already seen 82 oil leaks, including four major spills. More than 120 First Nations and Tribes (all of the First Nations in the lower mainland of British Columbia) have opposed the pipeline expansion. Several First Nations have challenged the pipeline in court.

Finally, we explained why putting pressure on the banks is an effective strategy:

“Barclays itself has pulled funding from mountaintop removal, coal ports and power plants, and Third Energy––which holds licenses to frack in North Yorkshire. Let’s add Trans Mountain to the list!