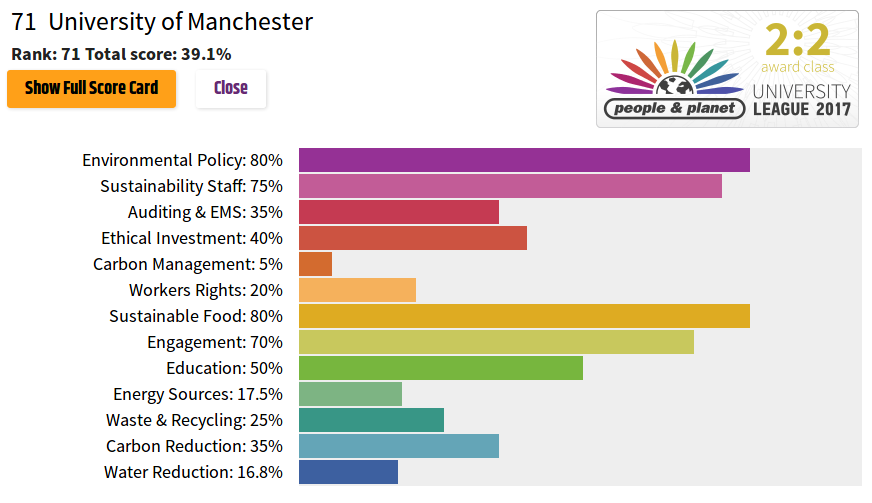 As People & Planet’s annual University League is published, the University of Manchester has ranked in the middle of the road in 71st place. This is yet more evidence that the University is lagging behind on sustainability and ignoring its students’ demands for action for the environment.

As part of Manchester People & Planet society, and the former Ethical and Environmental Student Officer, I have been campaigning for fossil fuel divestment at the University of Manchester for just over a year At the beginning of the campaign I was optimistic,with many ideas of how to make my university a more sustainable place to study. I could not expect how difficult it is to implement change in a University so stuck in its old ways. It was a challenge getting our voices heard by the very people who should take seriously the demands of their ‘customers’ – the University and its Board of Governors.

I soon learned that the University was incredibly wasteful as an institution, from food waste and packaging, to energy consumption, to dirty investments in fossil fuels, and very few people were aware of this. I was shocked to see how such a prestigious University I was proud to attend as a student, could be so hypocritical. Our neighbouring University, Manchester Metropolitan (with whom we famously have much competition) are ahead of us in almost every environmental aspect. They rank at the very top of People & Planet’s University League, with no money invested in fossil fuel companies, no research funding from the industry, and far better energy consumption and waste management schemes . If they can reach such heights, why can’t we?

Throughout last year our new society campaigned hard for Manchester to commit to full divestment, We emailed members of the Board of Governors, held protests outside their quarterly-annual meetings, invited guest speakers from Kings College London (who were, at the time, on the brink of getting a ‘Yes’ to divestment) to one of our marches, and still we received no response. When we first joined the campaign as a society, 1/4 of UK universities had divested. It has now increased to 1/3. As the University League shows, the University of Manchester are lagging behind in every aspect of sustainability.

Just as summer exams approached, the Board of Governors released a statement saying that they would revise their Social Responsibility Policy, and handed it to us as an answer to our 3-year long demands – strategically timed, some might say. Not only this, but they re-opened the NSS after the Students Union had successfully boycotted it, and announced the cutting of 171 staff jobs at the university. Having found the minutes from the meeting in which they discussed this, I realised that, once again, our ‘prestigious’ university have given us nothing but empty words and promises to keep up their reputation, and to keep us quiet. Despite their appearance, the University of Manchester is losing the race in more than just divestment.

It is outrageous that such a renowned establishment could be so duplicitous in so many ways. This has not put out our motivation, however, and we are still working towards getting the university to give us a direct and positive answer. Together with 4 other divestment campaigns (Cambridge, Leeds, UCL and UEA) we are calling for a National Day of Action for Divestment on the 22nd November, to join forces and unite in solidarity in our call for full divestment. By ramping up the pressure, we can give our universities a bad reputation, forcing them do what’s right for climate justice and divest the 3% of their total endowment fund from the fossil fuel industry.

A great summary.  It is all the more disappointing that the University's corporate management takes so little interest in the environment when it has two renowned research institutes, the Tyndall Centre and the Sustainable Consumption Institute.  It seems that as usual, the university values sustainability when it means research punds but not when it requires commitment to doing things differently.  I wonder what GM Mayor Andy Burnham thinks of this given his commitment "to make Greater Manchester one of the leading green cities in Europe".
Dr Mark Burton replied on 17 November 2017 - 2:41pm