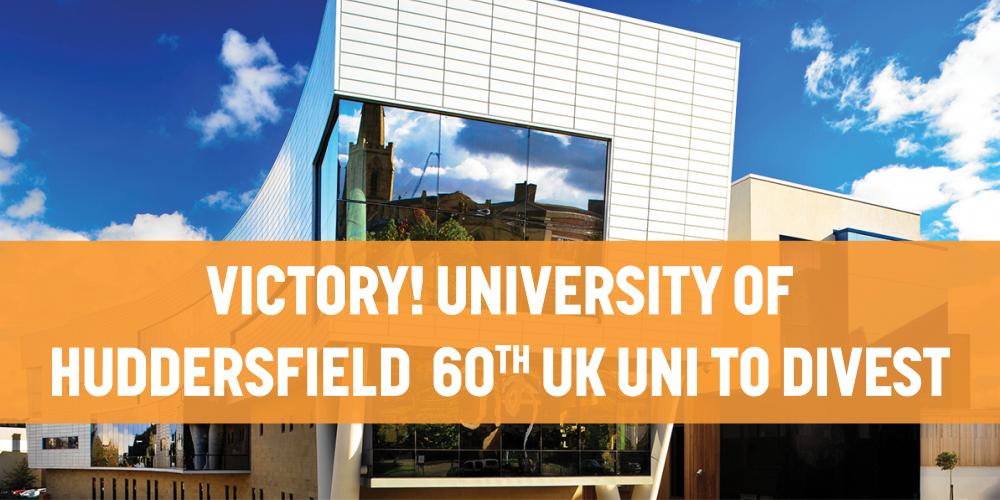 Huddersfield University has recently confirmed that its ethical investment policy dictates that it screens out all investments in fossil fuel companies. As a result, the
University is now being added to official Fossil Free University lists that are managed by People & Planet and Fossil Free UK respectively. Huddersfield University
becomes the 60th university in the UK to join the lists, joining the ranks of over a third of UK universities in ruling out investments in fossil fuel companies.

Postgraduate student Megan Bennett from the Fossil Free Huddersfield University campaign commented:"We are delighted to be able to celebrate Huddersfield University's Fossil Free stance today. Up to 80% of known fossil fuel reserves need to stay in the ground to stay within safe climate levels. If the fossil fuel industry follows its business plan, vast areas of our planet will become uninhabitable."

University alumni Gareth Savage from the Fossil Free Huddersfield University campaign added: "It is important that Universities and public institutions take steps away from the fossil fuel industry. With the Paris Climate Agreement world leaders agreed that global warming must be limited to well below 2 degrees if we are to prevent catastrophic climate change.  However, a recent study by Oil Change International found that we will already exceed 2 degrees of warming if all the carbon in the fossil fuel industry’s current operating wells, fields and mines is burned."

The Fossil Free Huddersfield University campaign is part of a global Fossil Free movement calling on universities and other institutions to stop funding the cause of climate change. Earlier this month New York City  announced that it is divesting its $189 billion pension funds from fossil fuels.[3]  Local MPs Barry Sheerman and Thelma Walker have supported fossil free divestment in their own pension fund, by signing the Divest Parliament pledge, which is also supported by Jeremy Corbyn. The Fossil Free West Yorkshire campaign is calling on the local authority West Yorkshire Pension Fund to follow New York's lead and divest from fossil fuels.

This is really good news and a positive step for the future of the planet and its inhabitants. An effort is being made in our Township of Westfield, Sheffield to promote this kind of initiative of not using fossil fuels and pushing for 100% renewables and the University's timely action will help us to make this possible.
dennis chambers replied on 24 January 2018 - 12:50pm