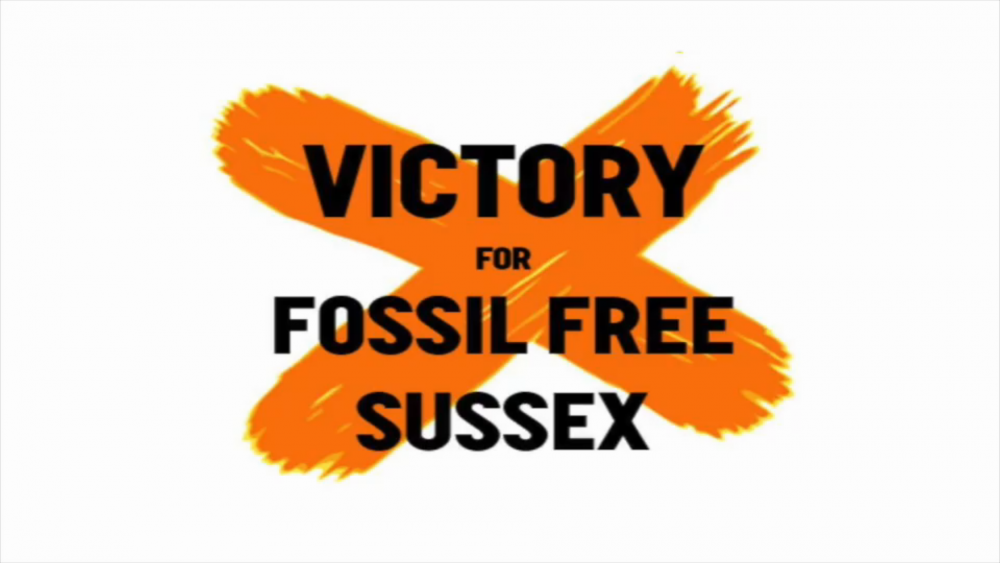 The University of Sussex has now moved it’s investment fund out of fossil fuels, after four years of Fossil Free Sussex, the student run campaign, lobbying the university to divest.

Fossil fuel divestment is the removal of investment assets including stocks, bonds, and investment funds from companies involved in extracting fossil fuels, in an attempt to reduce climate change by tackling its ultimate causes.

Annie Pickering, one of the founders of Fossil Free Sussex says “Divestment means that Sussex University are no longer funding the worst polluters of climate change such as BP and Shell. Instead, Sussex are investing in the real future, of renewable energies for a just transition. The divestment campaign across the world is winning. A massive congratulations to everyone at Sussex who was involved in the campaign; students, the Students' Union and lecturers.”

Fossil Free Sussex were founded in December 2013, and they have been lobbying the university to move their investments out of companies that are involved in fossil fuels since March 2014. They are one of the longest standing campaigns at University of Sussex, and it is entirely run by students.

Lara Bloch, another leader of Fossil Free Sussex said “After 4 years of students petitioning, awareness raising, protesting and negotiations, Sussex has finally pulled it’s money out of the fossil fuel industry! This is a significant step in Sussex starting to live up to its reputation as a progressive university. It goes to show that collective voices are strong and student campaigning has the power to make real change.”

Despite moving their money into Liontrust, the University of Sussex have not yet written the explicit exclusion of investments in fossil fuels into university policy. Allan Spencer, Finance Director at the University of Sussex said about Liontrust that “The Sustainable Investments team at Liontrust have demonstrated a thorough approach to positive screening and providing us with the assurances we require. We took great care in appointing Liontrust, as we wanted to make sure that the needs of our community were taken into consideration”.

Fossil Free Sussex campaigners said that they welcome this change to Liontrust, especially as the fund is fossil free however they want to see a concrete commitment to not reinvest in Fossil Fuels in the university’s investment policy hope to see this changed in the future.

You can contact Annie Pickering for more information on annie.pickering@peopleandplanet.org