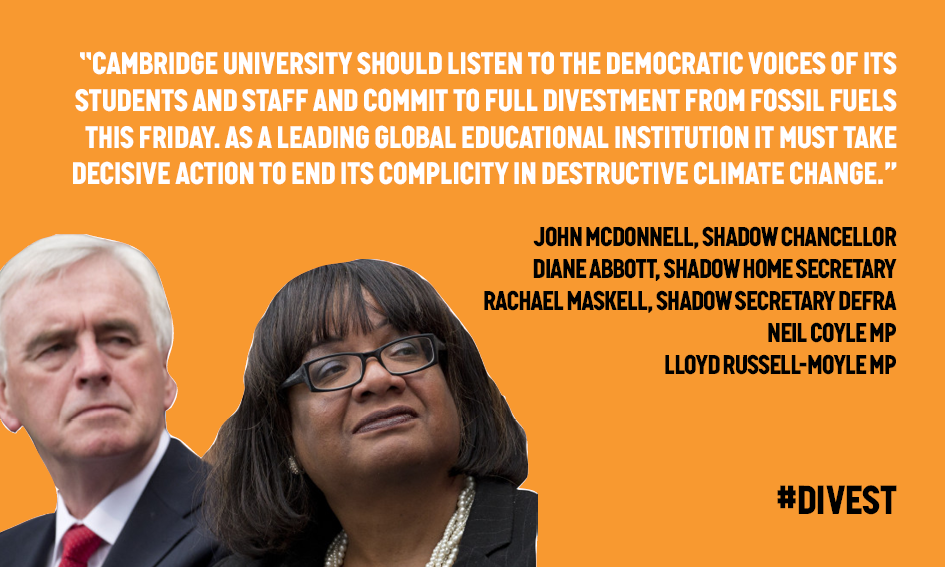 Thirteen members of parliament across three parties, including the Shadow Chancellor John McDonnell, Shadow Home Secretary Diane Abbott and co-leader of the Green Party Caroline Lucas, have today called for Cambridge University to remove its £377 million fossil fuel investments. This comes alongside an open letter signed by over 200 Cambridge academics which also calls for a commitment to full divestment. The University Council, its executive decision-making body, will have an ‘extraordinary meeting’ on divestment this Friday to make a final decision.

John McDonnell and Diane Abbott in a joint statement said: ‘Cambridge University should listen to the democratic voices of its students and staff and commit to full divestment from fossil fuels this Friday. As a leading global educational institution it must take decisive action to end its complicity in destructive climate change’

Caroline Lucas, the co-leader of the Green Party and MP for Brighton Pavilion said: “We know that investing in fossil fuels is both deeply damaging for our planet and financially imprudent - and there's no excuse for leading institutions like Cambridge University to be dragging their feet on issues like this.”

The academics’ open letter written by Dr Jason Scott-Warren, a Reader in English at Gonville and Caius College specifically criticises the Divestment Working Group report released by the University last week, which does not advocate full divestment and is expected by many to be passed by council on Friday.

It describes the report as ‘a transparent attempt to thwart the direct and positive action of divestment by offering a range of more distant and ill-defined proposals in its place.’ The letter has received over 200 signatures, including Sir David King, Sir Thomas Blundell and the author Robert Macfarlane.

Dr Jason Scott-Warren said in response to the working group report: ‘Future generations will look back and marvel at our determination to prevaricate as we watched the temperatures rising and the ice-caps melting.'

Sir Thomas Blundell, former head of the UK Science Council and a member of the University’s Biochemistry department reiterated these calls saying: ’The University should take the lead and divest itself of fossil fuels; we owe it to future generations’

Calls in favour of divestment from within the University were joined this week by the release of a widely-publicised study in Nature and Climate Change by Prof Jorge Viñuales and Dr Jean-François Mercure of Cambridge University’s Centre for Environment, Energy and Natural Resource Governance (C-EENRG). This outlined that by 2035 a fall in demand for fossil fuels could leave them sharply falling in value, or as ‘stranded assets’ and advised institutions to remove their fossil fuel investments now.

In a statement to the Cambridge University Press Office, Mercure said: ‘Divestment from fossil fuels is both a prudential and necessary thing to do...Investment and pension funds need to evaluate how much of their money is in fossil fuel assets and reassess the risk they are taking’

Khem Rogaly, a spokesperson for Cambridge Zero Carbon, the divestment campaign group, said: ‘Divestment is the obvious choice for Cambridge from both inside and out. If the voices of the Shadow Home Secretary and the Shadow Chancellor aren’t enough, then perhaps management should consider the research Cambridge produces, such as the report this week in Nature and Climate Change. Neutral scientific voices are making it blindingly obvious: full divestment makes fundamental financial and moral sense. Council has a clear choice this Friday: more complicity in climate crisis or global leadership.’

Notes on the campaign so far

Cambridge has faced severe pressure to divest from fossil fuels over the last 3 years from both its own democratic channels and direct actions by its students.

In May 2017, Regent House the staff governing body, ‘embodiment of the University as a democratic institution’, voted in favour of divestment but was circumvented by the Council who set up the working group process instead. Unanimous votes for divestment have also been won on both Graduate and Undergraduate councils.

In March, an open letter signed by 360 academics called for Cambridge to divest and in May 3 students went on hunger strike for 6 days before the expected decision was delayed until this week’s extraordinary meeting. 2 weeks ago, the University forcibly evicted students using a private contractor ‘specialising in traveller evictions’ from a week long occupation of its administrative hub, home to over 400 staff and the Finance Office, Greenwich House. Documents in the court order for the eviction noted one researcher’s concern that students would find ‘sensitive documents’ concerning the University’s relationship with ‘companies such as Shell’ during the occupation’ and publicise them.

Link to the open letter from staff criticising the report: https://docs.google.com/document/d/14L1L_g8dV31XTSw34M9W3jEszbvNonFAtWrWQzePGlA/edit?usp=sharing

‘Cambridge University should listen to the democratic voices of its students and staff and commit to full divestment from fossil fuels this Friday. As a leading global educational institution it must take decisive action to end its complicity in destructive climate change.

Some of Cambridge’s leading researchers this week released a major study in Nature and Climate Change, showing that fossil fuel investments could soon drastically fall in value, creating a ‘carbon bubble’. Divestment makes both financial and moral sense. Cambridge should follow the advice of its own scientists and act to protect its present and future students.’

John McDonnell MP for Hayes and Harlington, Shadow Chancellor of the Exchequer

"These brave campaigners deserve to win this crucial campaign. We know that investing in fossil fuels is both deeply damaging for our planet and financially imprudent - and there's not excuse for leading institutions like Cambridge University to be dragging their feet on issues like this. Cambridge could become a world-leader if they divest completely from fossil fuels, and in doing so they would be both guarding our environment and acting in the best interests of their students."

Caroline Lucas, MP for Brighton Pavilion and Co-Leader of the Green Party

‘I don’t know why Cambridge University will not do much more to divest itself of fossil fuels. Other newer universities such as the University of the West of England are moving towards carbon neutrality and refuse to make money from fossil fuel companies. Why won’t Cambridge follow suit and show some leadership and begin to treat this issue with the seriousness it deserves.’

“If we are to avoid catastrophic climate change, the vast majority of our planet’s fossil fuel reserves need to stay in the ground. At a time when more and more investment funds are divesting from fossil fuels – from the BMA and the Rockefeller Brother Fund, to a quarter of British Universities, including both of Bristol’s – it is surely time for others to follow suit and heed the warnings of the Governor of the Bank of England and the President of the World Bank about the financial risk of these investments. I very much hope that Cambridge University will use its considerable wealth and international standing to join the global transition we desperately need to make to a low-carbon global economy.”

The support for divestment from students, academics and the local community is mounting, and I hope that the University will bear this in mind when they make their decision. In the last few weeks alone we have seen a growing and powerful campaign from students, which I expect to continue until the decision that many of us want is made - DIVESTMENT."

"The University of Cambridge needs to be practicing what it preaches in terms of its statement on investment responsibility and align itself much more closely with ethical investment – which means moving away from investing in the fossil fuel industry. But whatever the ethics, it is the changing economic facts which should allow the University to make the right decision. The economic sustainability of the fossil fuel industry is in serious doubt. As the international community continues to push for low and zero carbon policies, many now predict that the carbon bubble will eventually collapse. The University must take this into account, and act prudently. This week they have the opportunity to make a commitment for the coming years that enables a smooth transition away from dirty fuel once and for all - they should take it"

Climate change is one of the biggest issues, and challenges, of our times.  Throughout history, education has been at the heart of social transformation, so in the twenty first century universities should be right at the forefront of sustainable investing.  By taking money away from fossil fuels, universities have the opportunity to show crucial leadership and support the transition to a sustainable economy. I am delighted that universities such as Edinburgh have already taken this step and hope others will follow their example”

The divestment movement is growing, with various individuals and organisations around the world pledging to divest from the fossil fuels that are causing climate change. Globally, institutions worth over $6 trillion have committed to reducing their exposure to high-carbon investments which risk becoming obsolete as the world transitions to a low-carbon economy. I believe this is an important way in which we - through our workplaces, unions, pension funds and our universities - can help to build a more sustainable society.

“It’s great to see a well-supported campaign at Cambridge University for divesting in fossil fuels. There are moves against investment in fossil fuels at universities and local authorities across the country as well as in Parliament itself - I hope Cambridge University takes note of the strength of feeling from students and can follow other institutions in ensuring sustainable investment.”

"This has been a long campaign and I pay tribute to the students and academics who have kept up the relentless pressure to bring us to this week’s decision. The University of Cambridge is a powerful force. I wholeheartedly support divesting from the fossil fuel industry and taking a lead on promoting the low carbon economy. This is a global movement, only last week I was pleased to vote in the European Parliament for a sustainable finance package, while the UN promote the cause through the UNFCCC. Cambridge leads the world in many ways - we can here too. This is not about undermining the University's investments, it is vital for everyone’s future that our environment is protected, most of all for those who live in some of the poorest parts of the world. Divestment from fossil fuels will ensure we are successful.”