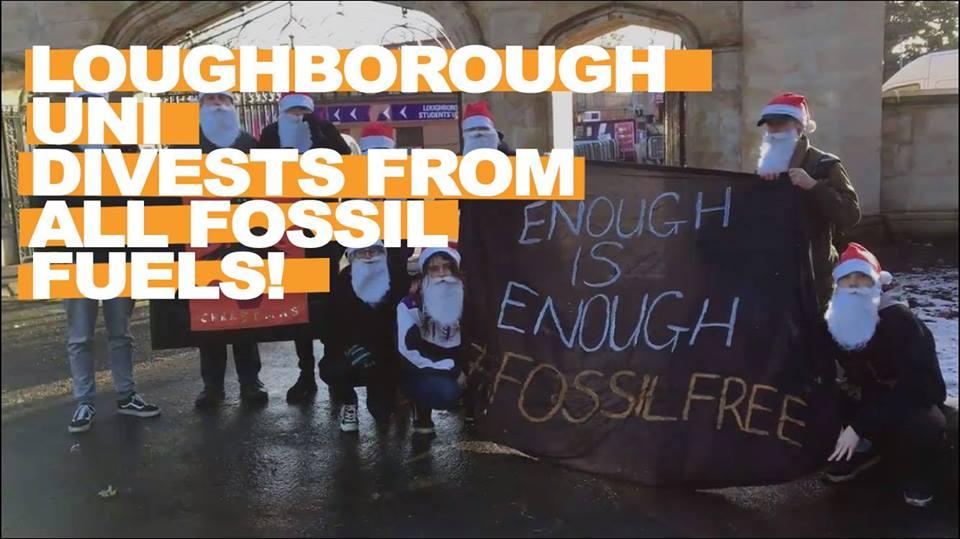 Loughborough University has announced that it is divesting fully from fossil fuel companies building on its prior freeze of all fossil fuel investments following student pressure.

The actions of Loughborough People & Planet secured meetings with the Vice Chancellor and Chief Operating Officer, and these discussions have been ongoing since the Easter break in order to bring about a binding motion at University council and secure this victory.

This confrontational student campaign included disruptive actions on campus over the first two terms in order to highlight an issue that had been ignored by the University for several years.

After threatening students with disciplinary and even legal action in the first term, the determination and commitment of students to hold their University accountable for its complicity in climate change led the institution to concede to the demands of the campaign.

The demand for divestment was supported by Loughborough UCU, 1,000 petition signatories and over 80 academics publicly supporting an open letter. In addition to a variety of creative actions, strategic targeting of open days by the group added the voices of concerned prospective students and their parents regarding the University's unsafe and unethical investments.

We thank the Vice Chancellor and management staff for engaging positively with us, and regret that this approach was not taken sooner. We hope it can now be seen that students want to push Loughborough to be the best University it can be, and we welcome the full divestment policy committed to by the University council.

For students: radical campaigns work. You do have a voice, and you can make change.
Loughborough People & Planet will be continuing with a new campaign and new members in the coming academic year, and we hope as many of you as possible will join us.