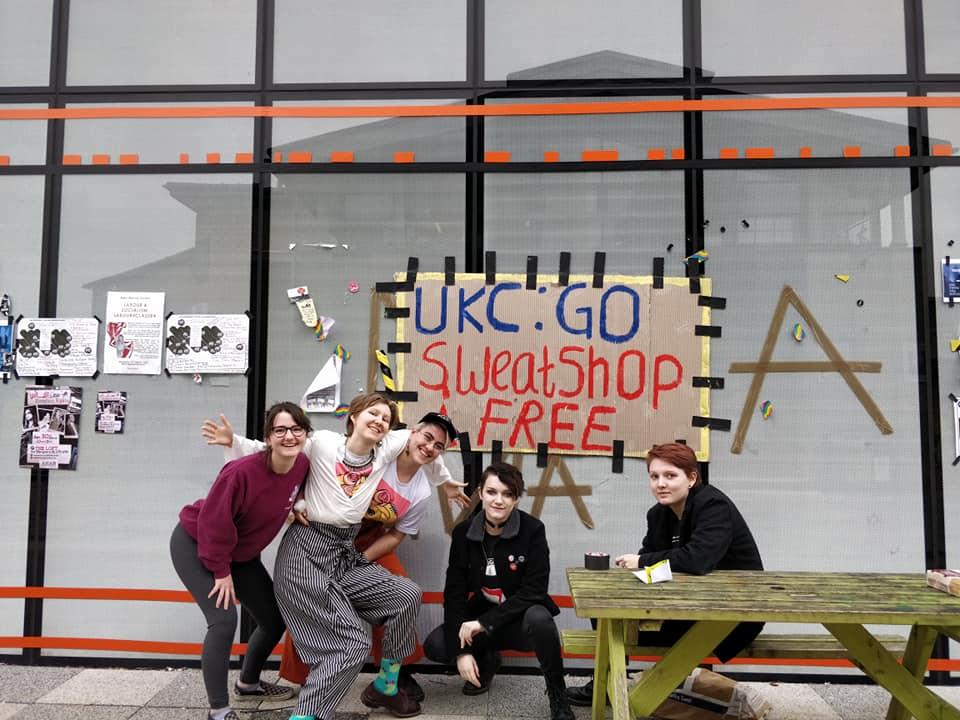 University of Kent student, Emily Rollerson, on how her university jumped from Third Class to a 2:1 in People & Planet’s 2019 University League.

People and Planet has opened my eyes to the ways in which universities are complicit in human rights abuses and environmental destruction. So finding out that the University of Kent’s electronics supply chains were not being monitored for workers rights abuses felt like a huge betrayal to me.

Often, we think of universities as places of hope and excitement, symbols of education moving the world forward one step at a time – and they are certainly advertised as such. However, through getting involved with People and Planet I’ve started to rethink this image as well as why it might be beneficial to universities to portray themselves this way.

As universities become increasingly marketised, the motivation becomes profit, not people. There is certainly a benefit, for them, in pretending this is not the case, particularly where attracting motivated young people is your primary business model. Nowhere is this more obvious to me than in the contrast between my university’s desire to build shiny new libraries and buildings which declare “Come here! Learn! The world is your oyster!” and its apparent inability to uphold workers rights. From the workers manufacturing their electronics to their own lecturers and academics. If the university is overlooking the rights of its academics, imagine how easily they can turn a blind eye to the horrific working conditions faced by the electronics factory workers producing the universities ICT products. The University’s supply chains are not being effectively monitored for things like forced labour, union busting, and discrimination. This is antithetical to the views they claim to hold, as well completely immoral.

Electronics Watch is an independent labour monitoring organisation that empowers electronics factory workers to fight for fair pay and conditions. In emails passed between our People & Planet society and the procurement team at UKC we were told that affiliating with Electronics Watch was not worth doing as they were effectively covered through their membership of a purchasing consortium. The amount of jargon thrown at us was baffling, and, honestly, threw us off. The email was lengthy and made us feel like we’d kicked up a fuss about nothing. If it weren’t for the amazing staff at People and Planet we wouldn’t have found out that everything we were told was effectively untrue – at least, the conclusion was.

Knowing that we had been lied to only fueled our anger at the situation. Being able to provide a thorough rebuttal of their claims, one by one, in our response felt gratifying but also ridiculous. How could it be that a small handful of students were the ones who were fighting for this cause? How could it be that the university were actively trying not to combat modern slavery? The message, to me at least, was extremely clear. They don’t care.

Realising that our university didn’t care felt disappointing but also freeing. When you understand that public image matters more to them than human rights, escalating a campaign becomes much easier. Unfortunately, there were very few of us and getting things off the ground was more difficult than I imagined. We circulated posters, gave talks and screenings and put up a huge banner outside the arts building asking that they go Sweatshop Free by affiliating to Electronics Watch. Drumming up momentum is hard in a society with so few members and getting the university to pay attention felt impossible. We didn’t get a response to our email, but we certainly let them know that their public image would be damaged. The People and Planet University League had the University of Kent at 101st place at the time, with a 3rd class rating and a mere 25% for workers rights. Affiliating to Electronics Watch would take all of ten minutes and cost a quarter of one student’s fees for the year, bringing up their score massively and ensuring that our electronics are sourced ethically.

Initially, this appeared to have no effect whatsoever, until we found out they have made one of the biggest leaps on the University League this year, from a Third Class to a 2:1 rating. Although they still haven’t affiliated to Electronics Watch, they have clearly taken note as they have done everything they could to get that rating up. Badgering UKC endlessly and targeting their public image has obviously had some effect, and it’s rewarding to know that our hard work paid off in some way. However, it’s still not enough. Moving forward, we plan to ensure that the University of Kent affiliates with Electronics Watch, and we won’t stop being a pain in their side until they do.