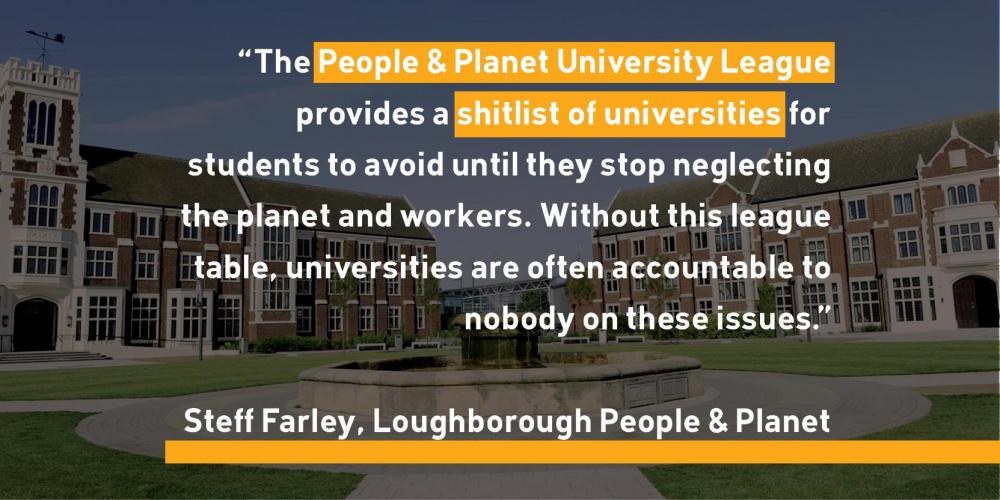 The People & Planet University League Table has just been released for 2018/19! This year’s table is particularly interesting as we are now more aware than ever that we stand at the crossroads of a climate catastrophe if we don’t take action, and the spotlight is on universities. What are universities doing to tackle the climate crisis? Which universities are still complicit in the destruction of the planet and the world’s most vulnerable communities? All is revealed in the People & Planet University League!

Many universities still appear more committed to green washing than meaningful action, with 78 institutions yet to even divest from fossil fuels. Still, reaching almost half of all universities going Fossil Free, and with eight universities in the last year alone, it is encouraging that some institutions are beginning to put their money where their mouth is. Divestment, of course, is only the beginning though: ethical investment in renewables is investment in their graduates’ futures.

Combatting climate change may be the biggest civil engineering challenge of our time and if universities are going to rise up to this challenge then they need to go further in their opposition to fossil fuels. For those that have divested, the millions of pounds they have previously invested in fossil fuels must go towards the research and manufacture of renewable energy. They also need to be severing ties with fossil fuel companies, refusing money from these companies and stop all new fossil fuel extraction research. Not only do they need to divest from fossil fuels and stop profiting from climate destruction, they also have a duty as educational institutions to lead the way on boycotting banks that are funding this destruction. Many universities in the league table are far away from this right now and it’s time they started making the serious moves that are necessary.

We know that many of our universities won’t take this action without public student pressure. The People & Planet League Table helps to apply this pressure by providing a shitlist of universities for students to avoid until they stop neglecting the planet and workers. Without the information from this league table being gathered and assembled publicly, university managements are often accountable to nobody on these issues. The table provides transparency of universities ethical behaviour and without this transparency, it’s very easy for universities to shirk their responsibilities on climate change. It’s up to us to make sure they don’t.