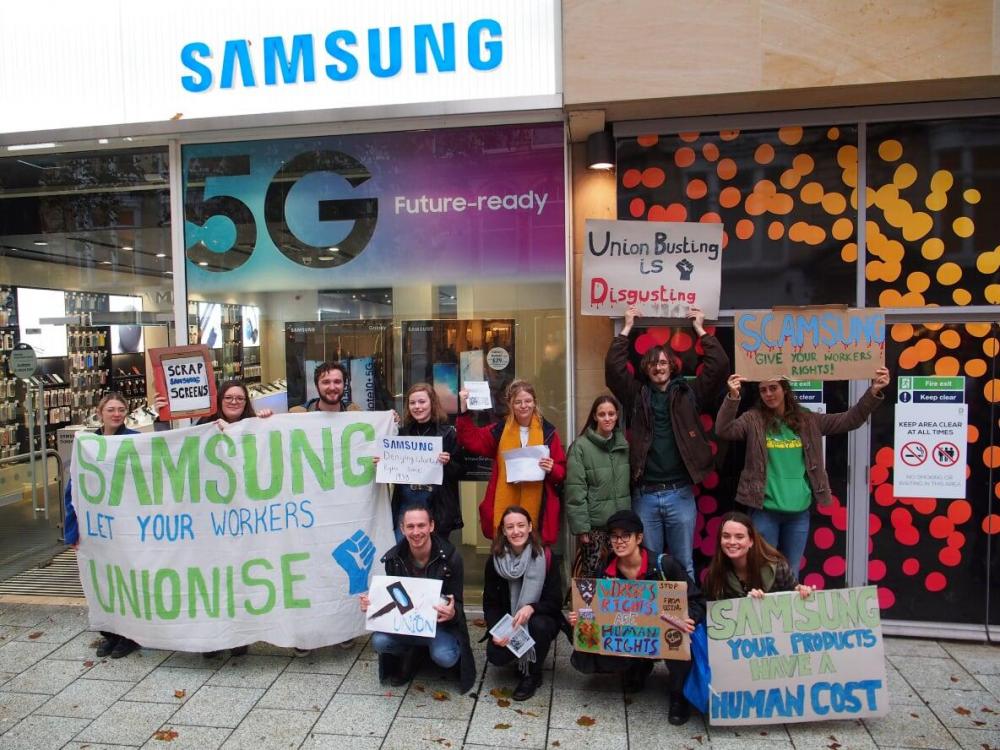 2019 has seen an unprecedented amount of activism, particularly around climate change, and this Autumn is no exception. Here at Bristol People & Planet we've been involved in the action in a number of different ways. On a rainy Saturday afternoon in late October the University of Bristol Chapter of People & Planet took a Megabus to Cardiff City Centre. There, we were joined by fellow students from the University of Cardiff and the University of Wales Trinity Saint David in a protest outside of the Samsung shop on the High Street. We were there protesting as part of the '48 Hours of Action Against Samsung' led by People & Planet to stand in solidarity with the workers of Samsung. While many electronics, and the components they contain, are built in sweatshops, the extent of the actions Samsung has taken to prevent their workers in Asia from unionising and the general abandonment of their duty of care to their workers is appalling. As Sharan Burrow, ITUC General Secretary said, 'From denying justice to the families of former employees who died from cancers caused by unsafe workplaces, to dodging tax and engaging in price-fixing cartels, one thing is constant: Samsung’s corporate culture is ruthlessly geared towards maximising profit to the detriment of the everyday lives of its workers.' We chanted outside Samsung for over an hour, with a brief police visit, and our petition was signed by dozens of people. Some of our favourite chants included 'Hey Samsung you're no good/Treat your workers like you should!' and 'What's disgusting? Union Busting!/ What's outrageous? Sweatshop wages!'. Our protest was widely publicised on Twitter and even reached the cover of the University of Cardiff's student newspaper!

In early November some members of People & Planet Bristol met up with other groups from across the South West and Wales People & Planet network for the weekend long event 'Nature Has No Borders' to discuss the impact of climate change on migration and future campaign strategies. The weekend was excellently organised with workshops given by 'Global Justice Now', 'Docs Not Cops', and People & Planet staff. The workshop from 'Global Justice Now' focused on exploring the relationship between colonialism, neoliberal capitalism, exploitation and the environment. We also spoke about the unequal impacts of the effects of climate change between the global north and south. 'Docs Not Cops' workshop focused on how immigration controls have been implemented across the health sector and what we as activists can do to help migrants gain access to health care. Similarly, People & Planet's Safieh's workshop examined how immigration controls have been integrated into the University structure and what students can do to undermine the Home Office's interference in education. We also had quite a lot of fun outside the workshops walking through the wonderful Welsh countryside and decorating our way through some craftivism! A shout-out must also be given to Green Gal Goods for providing us with an amazing array of vegan catering. If you are ever in Plymouth you should check out her café for some excellent and sustainable food!