After 2 years of student campaigning, Sussex Sweatshop Free have managed to secure Electronics Watch affiliation from their university. In their own words, here's how they managed it: 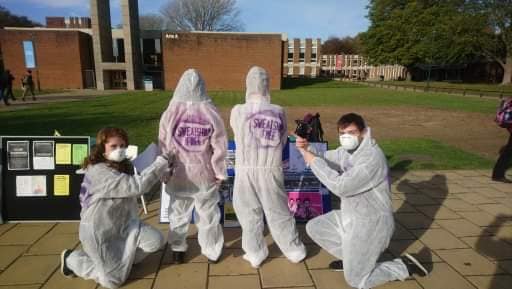 The Sweatshop Free campaign at Sussex started in February 2018 and gathered momentum after new members got involved after the refreshers’ fair that month. Once we got our heads around the campaign and how we could persuade Sussex to affiliate, we soon identified key people to speak to. We spoke to the Vice Chancellor in an open office event in February 2018 and were told that Sussex was affiliated through the Southern Universitities Purchasing Consortium (SUPC). Although we knew this wasn’t the case, we were new to the campaign and didn’t put our foot down straight away. However, the meeting was useful as we heard first hand that the University was interested in affiliating if it wasn’t already, which we could then use in further conversations. We went away and gathered evidence that Sussex was not covered by SUPC and sent this to the VC and Director of Finance. Over the next few months a lot of emails were sent back and forth proving SUPC did not cover affiliation and discussing the next steps.

We came back at the start of the 2018/19 academic year and recruited more members at Freshers’ fair and had an action where we put stamped post-it notes on computers all over campus. The post-it notes said ‘Support the workers who made this tech, Sussex Sweatshop Free’ with the our Facebook page address. Later that term, for People & Planet’s 48 Hours of Action Against Samsung Union-Busting, we had a stall on campus and were raising awareness of Samsung’s repressive policies and other issues in the electronics industry. This was covered in an article in the student newspaper. The Sweatshop Free team from the People & Planet office came to Sussex and delivered a workshop for us that term, which helped us identify allies and key decision makers in the University to target. We also came up with ideas for escalating the campaign. This was really useful and motivated us to network with other societies and keep finding contacts within the university.

Fast forward to the 2019/20 academic year when the campaign gathered more pace. We started very motivated, had a few new members on board, and had done a lot of groundwork the previous year. We were confident in our knowledge of Electronics Watch and why Sussex should affiliate. For our second meeting we put posters around campus to raise awareness of workers’ rights abuses in the electronics industry and of the campaign. We went to speak to the VC a second time, prepared with documents proving Sussex isn’t affiliated through SUPC and facts and figures about the University and Electronics Watch. We sensed there was still an interest and as agreed, followed up with an email. Electronics Watch affiliation was delegated to the Director of IT and when we didn’t get a reply for a week or two, some of us walked into his office uninvited and spoke to him. We learned the decision had been further delegated to someone else in the procurement department and so we organised a meeting with him. We got the meeting fairly quickly, possibly because he worried we would just turn up otherwise! At the meeting we took a folder with the University’s promotional material, in which we had annotated and highlighted every sentence which justified why, in their own words, Sussex ought to affiliate to Electronics Watch. Even though the meeting was very open and friendly, we had the folder on the table and it clearly sent out the message that we were serious about winning our campaign. Following the meeting, we had another article in the student newspaper with a quote from a supportive lecturer. A few more emails later, the decision was with the legal team. Finally, after 2 years of organising within the Sweatshop Free campaign, we found out the University of Sussex had signed up for full independent affiliation to Electronics Watch!

It’s hard to know exactly which part of the campaign made the most difference but in general we were always well prepared for meetings and wrote some very direct emails. We were also open and friendly and framed it that we were there to support staff if they had questions about Electronics Watch. Ultimately, Sussex thought they were covered by SUPC and unless there was a student campaign, they would not have had any reason or motivation to inform themselves otherwise and take proactive steps to obtain affiliation.

In our case we didn’t need to escalate the campaign (although we did have an escalation strategy prepared and ready to roll out), and we think that speaking to the right people was key. We spoke directly to the decision makers and gave the impression throughout that we weren’t going away. It took time to understand how, where and by whom decisions are made, but it was definitely worth understanding that and keeping up to date with where it had been delegated to. It was also definitely worth being clued up about Electronics Watch and affiliation so that we could answer a lot of questions. When new members were interested, we would explain the campaign and make sure everyone was happy with the aims and how it works. We took full advantage of the help from the People & Planet, who were very supportive throughout; running workshops, helping at freshers’ fairs and being on the other end of the phone or email to answer questions and keep us motivated. Staying motivated and persevering was really important as we received a lot of ‘no’s and faced barriers along the way, but kept going and can now proudly say our university is Sweatshop Free!