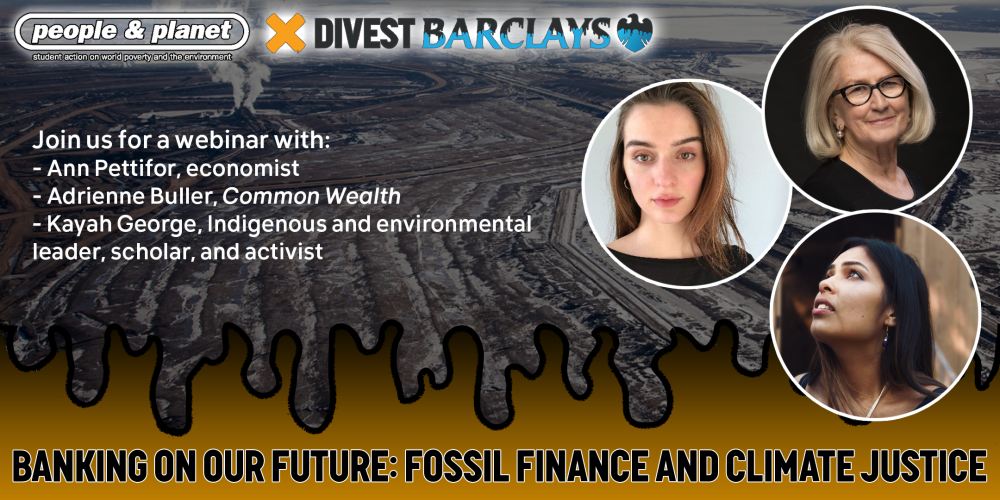 Last Monday the 4th of May, People & Planet’s Divest Barclays campaign held a webinar ahead of the Barclays’ AGM. At the AGM, which took place on the 7th of May, 24% of Barclays shareholders voted in favour of a ShareAction motion to phase out finance for fossil fuels and utility companies, in line with the 2015 Paris Agreement, against the bank’s formal recommendation to reject the shareholder-led resolution. While the resolution, and the Paris Agreement itself, don’t nearly go far enough in addressing the urgency of the climate crisis, this shows that the bank is facing increasing pressure, both externally and from its own shareholders.

In-person presence at the Barclays AGM has been an annual feature of the Divest Barclays campaign over the last few years, but this year needed a different form of action. Due to the online and physically distant nature of our organising work at the moment, we had an opportunity to engage with expert analysis and front-line resistance from a panel of excellent speakers.

Over 80 people tuned in live to hear from our guests, Kayah George, Ann Pettifor and Adrienne Buller and a call to action by members of the UK-wide Divest Barclays movement.

Speaking first, Kayah George 'Halth-Leah' told of her life protecting the traditional territories of her Tsleil-Waututh nation in resisting the Kinder-Morgan (now Trans Mountain) pipeline. Kayah introduced herself in her language and spoke movingly about her family’s ten-year resistance to the industrial interests and plans to build a pipeline through the inlet which is the most holy and our most sacred place on earth for her people and she calls ‘ our oldest grandmother’. She told the virtual audience of the creation story, how the grandmother was created from two handfuls of sediment from the inlet and of the duty and responsibly of the descendent Tsleil-Waututh people to honour and protect her. Kayah spoke of the effect on her movement of international solidarity and how uplifting it had been to have the support of people all across the globe, urging activists in the UK to continue to shine a light on these issues and the violence of the Canadian state against those who will do everything they can to protect their lives and livelihoods. The intimate and deep interdependence between the people and the local ecology was beautifully captured in the phrase used by Kayah that ‘when the tide is out, the table is set’, as she described the battle to restoring the water quality enough for it to safely supply food, only to face the catastrophic risks that a 7-fold increase in tanker traffic would mean for the land, water and food supply, if this project is allowed to go ahead.

Adreinne Buller, economist and researcher at CommonWealth spoke of the role that global financial systems play and how we in the UK can undermine the supports that prop up destructive fossil fuel companies. She drew attention to the role asset management companies play in providing capital to companies that are behind such extraction projects that the Tsleil-Waututh nation are resisting.

Adrienne mentioned the idea from 350.org founder Bill McKibben that ‘Money is the oxygen on which the fire of global warming burns.’ Indeed this the premise on which the global divestment movement is built: that if we want to stop fossil fuel consumption, limit the effects of climate disaster and protect people and ecosystems, we have to stop our institutions and governments giving financial support, active or passive, to the industry responsible.

She described the challenge in ethically managing one’s own personal finance, when the #5 investment of the so-called Climate Aware policy with Nest, a UK government-backed pension fund, is fossil fuel giant ExxonMobil. This kind of greenwashing and lack of transparency characterises the asset management sector, and Adrienne believes that demanding democratic accountability from these institutions is a vital part of eroding the legitimacy of funding destructive industry and climate injustice. After all, it’s our money, we can demand transparency and accountability from those who manage it. Adrienne ended with the message that global financial systems are a powerful tool, and can be used for good, or evil, that power, in the case of pension funds, comes from us, and its time we reclaimed it.

Ann Pettifor, economist, organiser and key figure behind the Green New Deal movement. spoke of the tangled web of oil in our financial systems and links to other destruction in with arms deals and militarisation. She described, in clear terms how certain commodities, such as oil, copper and soya were linked to the US dollar, and the impact of this in times of crisis. US imperialism and inequitable access to financial supports impact poor countries’ ability to borrow or access goods they need to survive, because their access to US dollars is at the whim of market forces outside their control. Ann made a clear and compelling case for the disentanglement of the oil sector in financial markets and described how any crisis in the system makes for an unjust spread of the risk and costs associated, in which rich nations can protect one another and leave other countries to suffer the worst economic and social consequences.

Ann described her experience in campaigns for financial justice in the past, such as the Jubilee 2000 campaign for international debt cancellation, and the huge public attention drawn by a relatively low-budget campaign. She drew comparisons between the role of People & Planet’s first Divest Barclays campaign against South African Apartheid, and how institutional boycotts can be successful in pushing for change. Ann emphasised the vital importance of education as a key campaign strategy, and making available the information about injustice and economic implications, in straightforward terms

Drawing together the structural and the personal implications of fossil financing, Kayah made connections relating to the parallels between feminist movements and environmental activism. Echoing Ann’s delight at being on an all-woman panel, she mentioned the women-majority council of her people and the gendered violence that occurs alongside large infrastructure projects: citing ‘man-camps’ that are part of a history of colonial violence. She drew our attention to the day of remembrance for missing, murdered indigenous women, girls and two-spirit people and how neocolonial violence continues in the name of fossil fuel extraction. She drew a link between the feminine of the inlet and the water they fight to protect, and the nature. Further questions from the online audience of students and organisers addressed the complexity of centring a just and climate-focused recovery from the current health and economic crisis and the

Finally, we heard a call to action. Steff described her involvement in the Loughborough People & Planet divestment campaigns, with memorable and effective actions against the university’s links to Barclays. Steff discussed the power and rationale of leveraging the university’s reputation against it, and the vital role of grassroots organisers to push for change in the here and now.

This webinar reminded campaigners of the opportunity we have with the necessary increase in online organising, for connecting struggles and showing solidarity across borders. It was an absolute privilege to hear from Kayah of her work in resistance at the forefront of industry on the ground. This grounded the economic and financial analysis from Adrienne and Ann and together created a cohesive and compelling call to action for those of us in the UK to continue the fight for a fossil free future.

There is a full recording of the webinar and transcript available. Also published this week by the Divest Barclays campaign was an article and open letter.