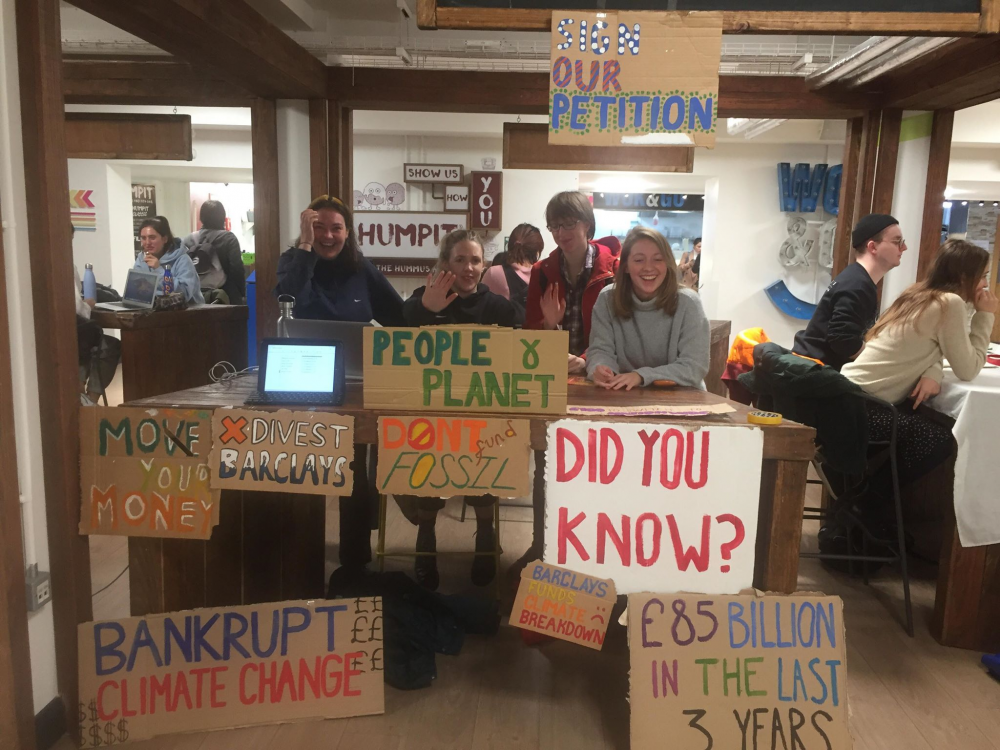 Our biggest achievement this year was at Leeds University Union’s May Forum, where we put forward a motion asking the union to lobby the University of Leeds to cut ties with Barclays until it stops funding the climate breakdown. Having achieved a huge victory at the start of the academic year, with the University divesting £3.6 million of its shares in Shell, BP and Total, we wanted to keep up the momentum and pressure the University to examine its secondary links to the fossil fuel industry.

The motion to cut ties with Barclays was widely supported by students at the Forum and passed by 77%, meaning that it will now become Union policy for the next three years. We look forward to working with the union to put this motion into action, as cutting ties with Barclays is a crucial step in dismantling our University’s complicity in the climate crisis.

This successful motion was a reflection on the various campaign events we held throughout the year. At the start of the year, we held a Divest Barclays workshop, where People & Planet representatives taught us how to run a successful campaign. It was a fantastic opportunity to group together and really focused on our ideas and strategies.

One way we spread the word about the Divest Barclays campaign were the information stalls we set up in our Union building. During these stalls, we distributed information leaflets on the dangers of economic ties with Barclays. We spent a couple of hours chatting to the student body about our campaign and why it matters. We also encouraged them to sign our petition to the University to cut ties with Barclays - something many students were on board with!

In this way, we’ve made huge strides in engaging fellow students and promoting the causes which we stand for. We held our first LUU People & Planet Pub Quiz; through hiring out a cosy room at The Packhorse and designing our own questions featured around current global issues, politics and the environment. We were able to raise £32 in profits to fund future society activities and causes, where around 70 people attended. We also engaged with the broader student and staff body through speaking at the Youth for Climate Strikes in regards to the climate emergency. We’ve certainly made waves in campus engagement and collaboration with other like-minded groups and individuals in supporting solidarity.

Freedom of Information Acts have also been obtained regarding investment by the University of Leeds. Through this, we were able to be successful in getting exact numbers of investment rates and figures into companies which invest in fossil fuels, as well as fossil fuel companies. This has given us scope to question and make our voices heard regarding the current level of financial support that our educational establishment offers to those who are active in driving the climate emergency. This supported our movement in ensuring Leeds University Union is accountable for lobbying the University of Leeds in cutting ties with Barclays Bank.