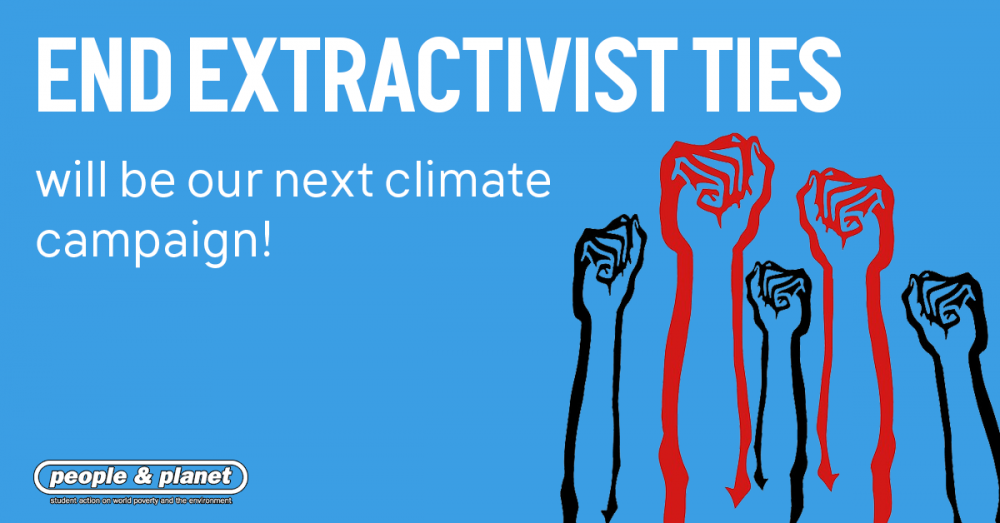 On Saturday more than 30 students from People & Planet groups all across the country came together to decide our next climate campaign. We're thrilled to announce the End Extractivist Ties proposal was chosen from a really strong field.

Over the past few months, students from universities across the UK have developed proposals for a new climate campaign to take over from Fossil Free from 2021. Five proposals were brought to the session, and three were then voted on for discussion.

First Round of Voting: Fossil Free Universities (FFU) won the most votes, followed by EET and the Green New Deal (GND). Following our Single Transferrable Vote (STV) system, Fossil Free Finance and Frontline Solidarity were eliminated, having failed to reach the required threshold of eight votes.

Discussion: following the presentation of the remaining three proposals, students had an hour in groups and collectively to talk through the proposals. If you were in a breakout room and haven't yet sent through your notes, please send them through to us.

Final Round of Voting: 30 students then voted to choose one campaign. GND was eliminated in the first round using STV, with five votes. After votes were redistributed, EET beat out FFU by 17 votes to 13. Congratulations to the student who developed it and huge thanks to students who shaped other proposals. This was our student-led, democratic network at its finest, producing brilliant, grassroots ideas.

It's important to remember that Fossil Free and Divest Barclays will continue next academic year. Over the coming months, staff members will work with funders and students to develop and secure this new campaign along the lines laid out by the End Extractivist Ties proposal. We hope to be able to launch the new campaign for the 2021-2022 academic year. Get in touch if you have any questions or want any further information regarding this process!