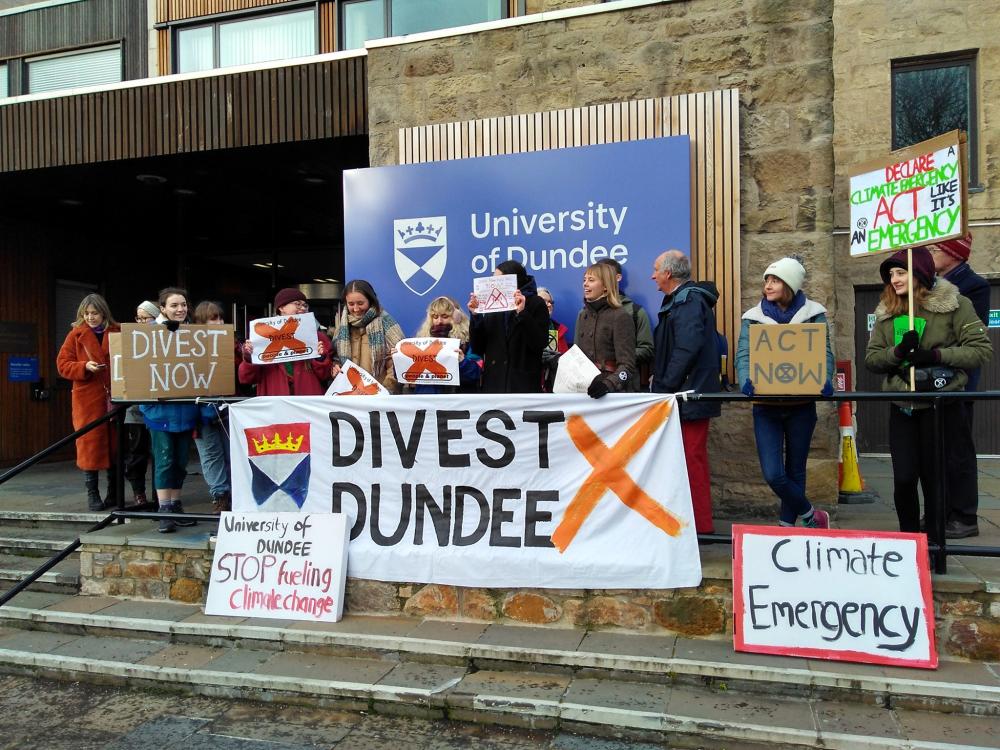 After a rather challenging summer, I felt like our prospects to get the University to listen to us and our demands for divestment were even worse than before. Most of the emails we had sent out over summer to keep up the pressure had been unanswered, so we came back at the start of the academic year feeling rather low in spirit and mind. It just felt like there was no chance our voices would be heard and acted upon.

Yet, as soon as the first semester started, we were invited for a meeting with the University’s Financial Director. I attended as representative of the students together with Ellie Harrison, as representative of the staff. It turned out to be rather successful. The Financial Director suddenly seemed keen on divesting – something which had not been apparent following our first demo staged on the date of the Endowment Committee meeting in November 2019. It was then that we had handed her our petition with 183 signatures, which we had printed out and put inside an oil can. After going to several online meetings to speak to second and third year students, the petition has since reached 525 signatures. This shows that last week’s decision by the University to finally listen to us and divest from all fossil fuels is clearly what students want.

Our campaign tactics had to change massively because of COVID – we had to organise ourselves online, which went far better than anticipated and although this was yet another obstacle to face, the outcome was very much worth the effort.

Being an “eco-killjoy” (to borrow Sarah Ahmed’s words) can be really difficult - it feels sometimes like one has to knock down the same doors over and over again. Yet despite everything, working closely together and giving each other the backup needed, enabled us to keep the pressure up and push the University into making their decision. Over the course of the campaign, the actions ranged from mobilising students and staff to sign the petition or attend the demo (with media coverage by a local TV show!) to more behind-the-scenes work. This included researching or sending email after email to the University administration, the press and to People & Planet, who were a massive help throughout the campaign.

But this is just the University’s first step to drop the green facade and actually go green. Our final demand is yet to be met, so we are keeping the pressure up on the University of Dundee to cut ties with Barclays (their current Investment Manager) – a bank which is notorious for funding fossil fuel extraction. We look forward to having People & Planet at our side again as we slowly but surely make our way towards a better future and climate justice.