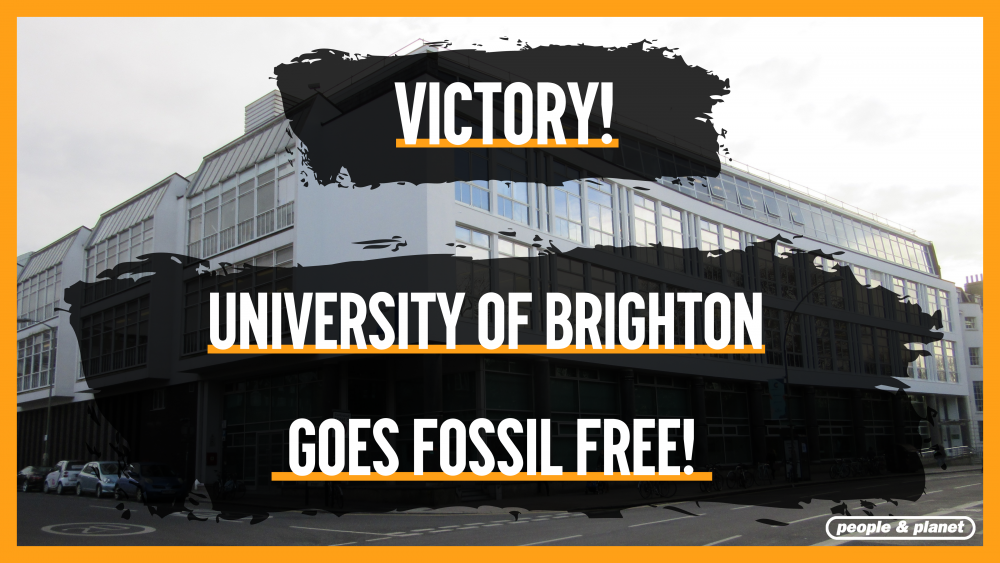 The Declaration states: ‘Our university is a globally responsible institution and commits to remaining fossil free as an act of solidarity with the frontline and indigenous communities disproportionately impacted by both climate change and the extractivist projects of fossil fuel companies.’

The announcement from People & Planet, the student network leading the university wing of the UK divestment movement, came in the same week as the London School of Hygiene & Tropical Medicine announced its commitment to divest from all fossil fuel companies. The University of Brighton is the third UK university to make a public divestment commitment in 2021.

In a public statement, a spokesperson from University of Brighton said "the university has declared that it holds no direct investments in extractor fossil fuel companies, and will never directly invest in these companies’ and that ‘The fossil fuel industry is a leading contributor to climate change, with just 100 companies estimated to be responsible for around 70% of global carbon emissions."

Co-Director of Climate Campaigns at People & Planet, J Clarke, said: “It’s great to see that the hard work of the student divestment movement has created lasting momentum that is seeing universities going Fossil Free in quick succession. Those universities without public commitments to divest from fossil fuel companies are increasingly exposed as outdated, irresponsible and indefensible investment decisions that do not match actions with rhetoric around the climate crisis in UK higher education.”

With the unprecedented UK-wide move to remote learning for universities, the Open University has frequently been held up as an example of progressive ways of working. However, J Clarke was critical of the institution, stating “The Open University has been well-positioned to cope with the global crisis of COVID-19. The institution’s investment portfolios, on the other hand, remain heavily invested in the companies most responsible for the global climate crisis, with over £4 million estimated to still be in fossil fuel companies.”

Grace Curtis from Fossil Free OU, the student campaign group pushing for divestment, said: “The Open University has thus far been incredibly complacent in its response to the climate crisis despite its extensive environmental teaching and research, and this needs to change, starting with fossil fuel divestment.”