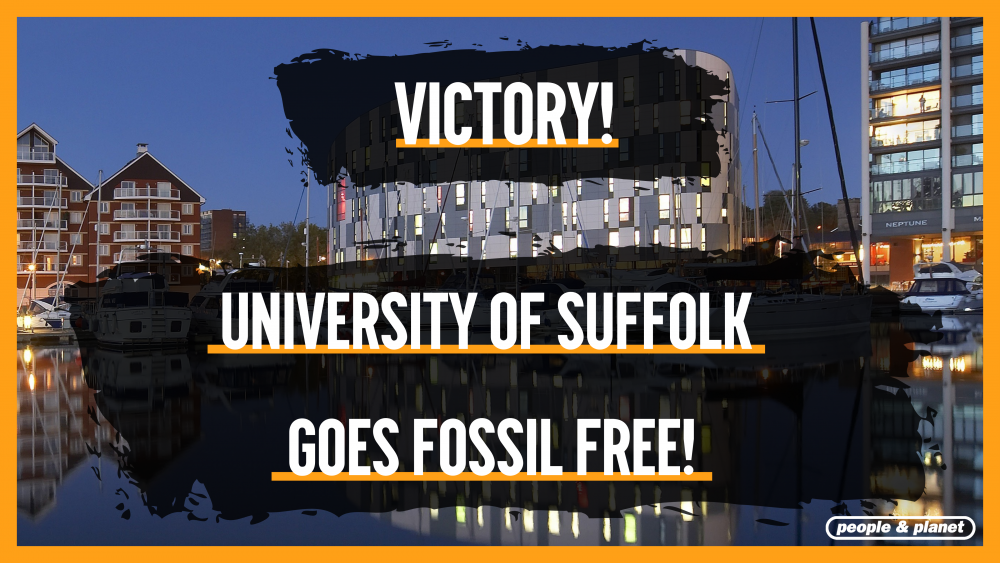 The University of Suffolk has become the 87th UK University to make a public commitment to divest from fossil fuel companies. Suffolk affirmed their fossil free status and committed to permanent exclusion of fossil fuel companies from their investments by becoming the 18th signatory to People & Planet and NUS’ Fossil Free Declaration. They also became the third university in the space of a month to make a public commitment to sever ties with the industry.

The announcement from People & Planet, the student network leading the Higher Education sector’s role in the UK divestment movement, came within a month of the London School of Hygiene & Tropical Medicine’s commitment to move away from all fossil fuel companies and the University of Brighton’s sign up to the Fossil Free Declaration.

With more UK universities having now made public divestment commitments than those who have not, the movement looks to institutions such as Russell Group member the University of Birmingham who has yet to indicate any intention to take urgent, meaningful action in response to the climate crisis. This is in spite of the strong student campaigns that have been advanced across UK campuses since the Fossil Free campaign began in 2013.

92% of Russell Group universities have now made some form of divestment commitment, with the University of Birmingham and Imperial College London being the only two left, trailing behind the trend towards this action on climate justice both nationally and within the Russell Group itself.

Co-Director of Climate Campaigns at People & Planet, Laura Clayson, said: “It’s incredible to see the University of Suffolk confirm their ongoing commitment to climate justice as part of this spate of public divestment announcements. It’s also interesting to reflect upon which universities are falling behind the national trend. Particularly in the case of the University of Birmingham and Imperial College London, who are part of a group that perceive and like to position themselves as sector-leading and pioneering.

The Russell Group likes to highlight how ‘more than two-thirds of the world-leading research produced in UK universities’ is created within their institutions and yet it is evident that both Birmingham and Imperial are failing to respond to their own groups’ research outputs on climate change. Both Birmingham and Imperial should remedy this shameful inaction by making a full fossil fuel divestment commitment immediately”.

University of Birmingham campaigner, Evie West, said: "Congratulations to Suffolk! Another university publicly pledging to divest and showing that our universities are starting to listen to their own research and act on it.

It's time for the University of Birmingham to follow suit, stop greenwashing and make a public pledge. Our university reassures us behind closed doors that it is taking action, but we, the students, see nothing. Without a public, time-bound pledge, the university can continue putting profit over people, and its students. Whilst it continues to fund these destructive organisations the University of Birmingham is in direct conflict with its own ethical and environmental claims."