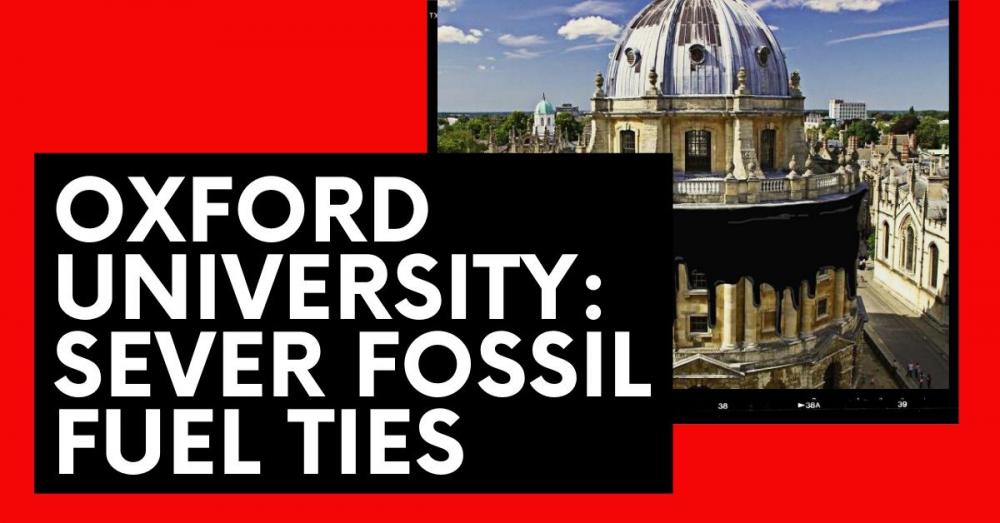 On April 20, the student-run Oxford Climate Justice Campaign (OCJC) has revealed that since 2015 the University of Oxford has received over £8.2 million in research grants and £3.7 million in donations from the fossil fuel industry. These revelations are part of a 50 page report on Oxford’s financial and institutional connections with the fossil fuel industry, split into the sections ‘Research’, ‘Social License’, and ‘Revolving Door’.

OCJC demands that these ties be cut in recognition of the climate crisis and the global injustices that it exacerbates.

The ‘Research’ section outlines how extractive research is conducted by Oxford academics. This research is often funded by, and is of immense value to, the fossil fuel industry. The ‘Social Licence’ section highlights donations to the University from fossil fuel companies such as BP, Rio Tinto, and Saudi Aramco, which benefit the industry’s public image. The 'Revolving Door’ section describes instances of simultaneous employment at the University and in the fossil fuel industry. It also shows how Oxford’s Careers Service actively encourages students to work in the sector by promoting positions in the industry.

The report’s foreword is written by the exiled Chair of the United Liberation Movement for West Papua, Benny Wenda. Throughout, OCJC emphasises climate justice. They argue that Oxford University’s support of the fossil fuel industry equates to complicity in the environmental racism and human rights abuses the industry commits.

The report is paired with a petition, calling on the University of Oxford to sever its fossil fuel ties.

‘The fossil fuel industry perpetuates the climate crisis and upholds global injustice. It contributes to the death and destitution of people worldwide, particularly the marginalised and disenfranchised. The University of Oxford must cut all its ties to this extractive industry.’

‘We acknowledge that cutting ties with the fossil fuel industry will require great effort. This makes it all the more important to start this process as soon as possible. We will not stop campaigning until the University of Oxford stands free from these ties.’

‘Institutions like the University of Oxford, revered around the globe as a beacon of reason and justice, cannot continue to perpetuate and gain from the pillaging of our land. We hope those who aid BP and other fossil fuel companies listen to us before it is too late.’

‘British universities play a key role in propping up the fossil fuel companies most responsible for the climate crisis: this is something student campaigners in the People & Planet network have been saying for over a decade. This report from Oxford Climate Justice Campaign details the extent to which one of the most prestigious universities in the world is directly implicated in the unfolding climate catastrophe that is already hitting the world’s marginalised populations first and worst. It is essential that all universities sever their ties with oil, gas and mining companies as a matter of urgency, and the University of Oxford is no exception.’

The data within the report has been ascertained through Freedom of Information requests, or is to be found in the public domain.