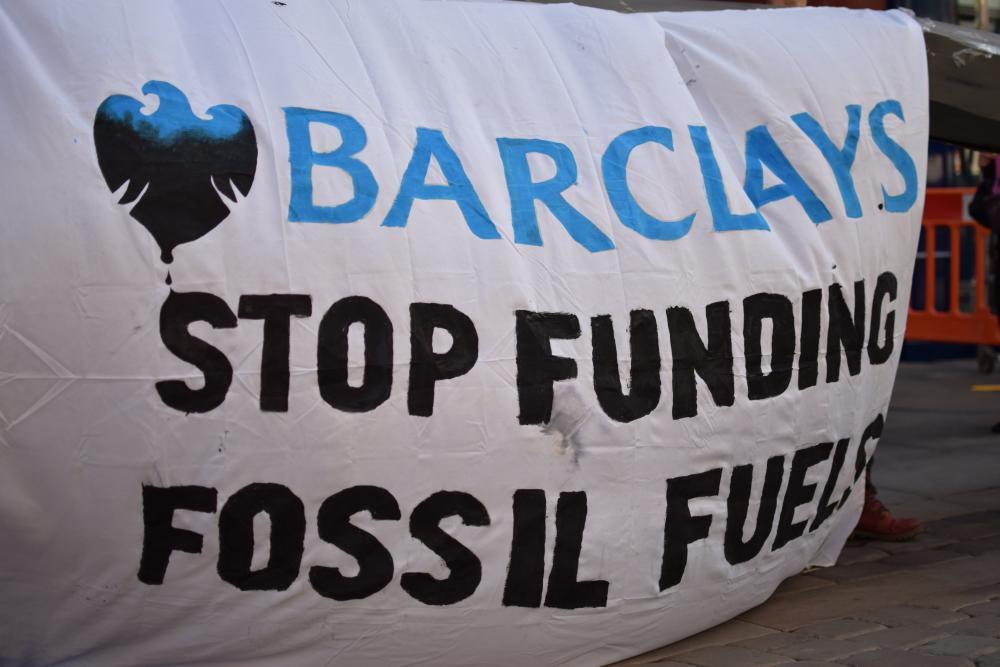 Calls for institutional boycotts of Barclays bank have grown louder after shareholders failed to support the climate resolution coordinated by Market Forces at yesterday’s AGM. The UK’s largest higher education campaigning organisation, People & Planet, has announced that 10 student unions across England, Wales and Scotland have voted to institute blanket boycotts of Barclays over the bank’s climate inaction, and urge universities to follow suit.

Only 14% of Barclays shareholders voted in favour of aligning Barclays’’ business practices with the Paris Agreement, meaning Barclays’ current position as Europe’s largest fossil fuel funder and the biggest UK coal funder is likely to remain unchanged. In the wake of the AGM’s disappointing result for climate campaigners, 10 student unions across the UK have been announced as voting for boycotts of Barclays bank over its fossil fuel funding. Campaigners are calling for universities, philanthropic trusts, faith groups and local authorities to adopt similar boycotts in a mirroring of tactics used in the fossil fuel divestment movement.

J Clarke, Co-Director of Climate Campaigns at People & Planet, said:
“The failure of shareholders to comprehend the urgency of the climate crisis, Barclays’ significant role in perpetuating it, and the need to end fossil fuel funding immediately is monumentally disappointing. We know from those in the Global South that are feeling the effects of climate change most keenly that we cannot waste any more years hoping investors come to their senses.
The student movement has long made it clear that climate inaction carries consequences, and these 10 student unions voting in favour of institutional boycotts of Barclays will be the start of many more following suit, both within higher education and beyond.
The message to Barclays is clear: end financing for fossil fuel projects, or lose valuable customers on a massive scale.”

Adam McGibbon, UK Campaign Lead at Market Forces, said:
“Barclays’ institutional investors have some serious questions to answer about their commitment to climate change action. Having seen Barclays’ climate policies fail to reign in its investments in fossil fuels in the last year, to have investor support for climate change action drop this year compared to 2020 smacks of either indifference or incompetence from many major investors.”

Jeanne Martin, Senior Campaign Manager at ShareAction, said:
“During the AGM, Barclays repeatedly said that ‘actions, not words’ was what mattered. We agree. Barclays should now put its money where its mouth is and publish a sector-leading fossil fuel policy ahead of COP25.”