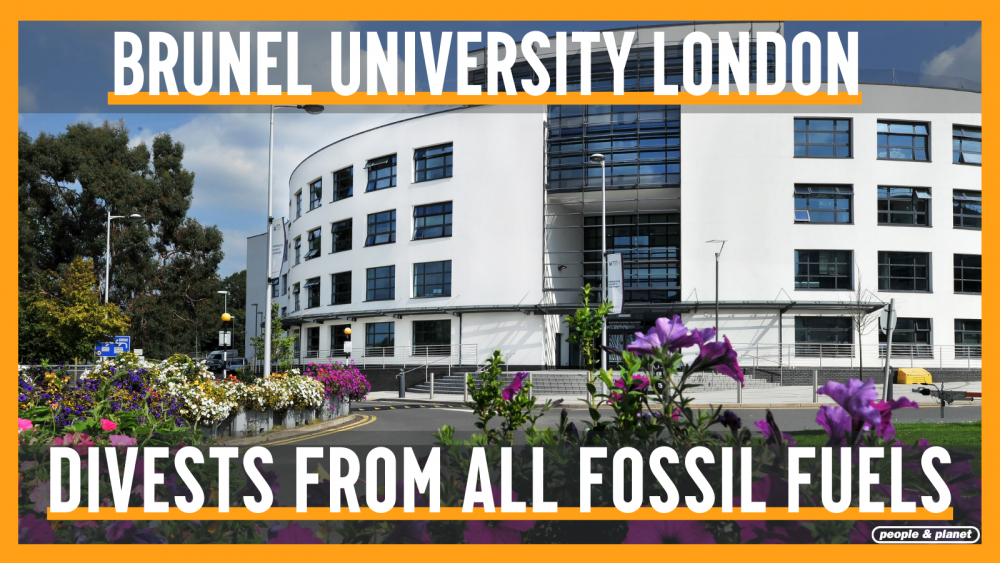 Crucially, this policy includes a commitment to not hold any fossil fuel investments in the future, therefore safeguarding Brunel’s status as a Fossil Free University. The Fossil Free campaign, which sees students demand their universities divest  from the fossil fuel industry, has led to over 60% of UK universities to commit to divestment. To date, this student-led campaign has seen upwards of £15 billion in university investment funds removed from the fossil fuel industry.

Fossil free has been key in universities’ acknowledgement of their duty to consider social and environmental impact in addition to profit when making investments. Student campaigners at Brunel are now calling on the university to divest from border industry companies that enable the exclusion, surveillance and detention of migrating people in the UK and worldwide. This campaign, Divest Borders, recognises the role of the border industry in profiting from climate displacement and war. Divest Borders is a student campaign taking place at universities across the UK and has already won endorsement from student unions across England and Scotland.

Laura Clayson, Campaign Manager at People & Planet said: “It’s incredible to witness Brunel University London respond to student demands for Fossil Free. Every time a university rejects the fossil fuel industry it is an act of solidarity with both the frontline communities hit first and worst by the climate crisis and those resisting the impacts of extraction on their lands. We look forward to Brunel excluding the companies complicit in border injustice next, for climate justice cannot be realised without meaningful recognition of how deeply entwined it is with migrant justice.”

Pippa Jillings, of Fossil Free Brunel, said: "With universities and other educational institutions being hubs of youth and innovation for the future, it's time they took responsibility for the future of their students. I'm so pleased that Brunel has joined 98 other universities across the UK in excluding fossil fuel companies from its investment portfolio - an amazing step towards delivering climate justice. We would like to continue this progress, calling on the university to ensure divestment from the security and border industry, which continues to profit from surveillance of migrants."