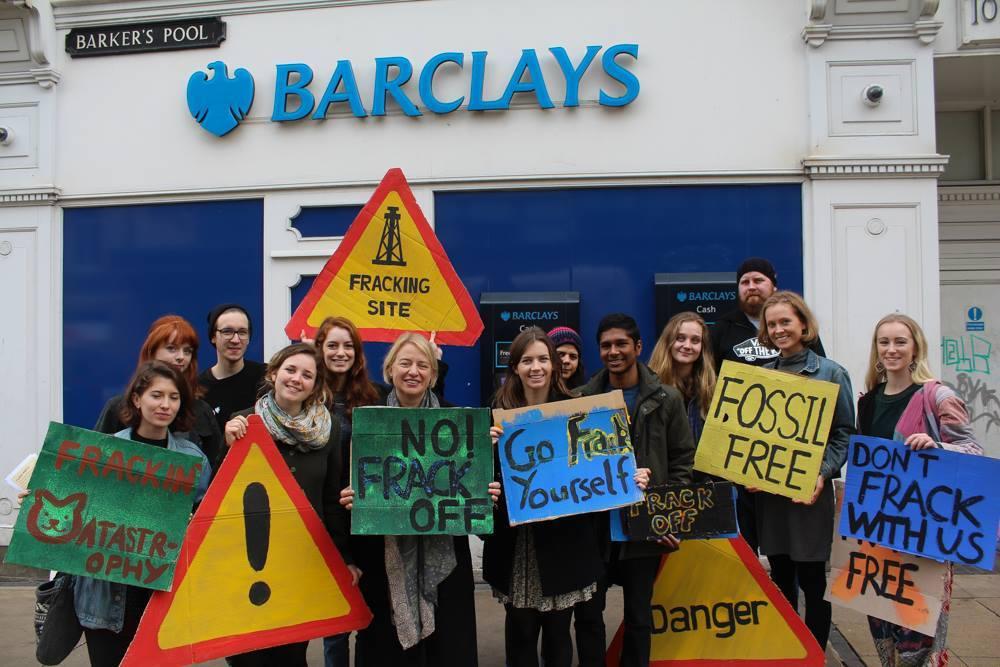 Last week at the Barclays Annual General Meeting (AGM), the Chairman John McFarlane told shareholders that the bank would be withdrawing their financing of fracking company Third Energy - licensed to frack in Ryedale, North Yorkshire. Barclays owns 97% controlling stakes in Third Energy. This could be a huge victory for the anti-fracking and climate justice movement in the UK, showing the power of organising and building coalitions in our local communities. This decision is due to years of tireless campaigning led by residents in Ryedale, and supported by hundreds of creative direct actions taken by students across the country.

The first wave of actions took place as part of Go Green Week in February 2016 where Sheffield students organised a sit-in and demonstration at our city’s flagship branch. Since then, demonstrations have grown in scale and ambition in parallel with the growth in support for the campaign against Barclays’ fracking exploits. Actions have been outside Barclays branches, on campuses, and have even led to Students’ Unions like my own in Sheffield, kicking Barclays off campus, removing Barclays ATMs!

The news of Barclays’ plans to drop Third Energy first came when Monica Gripaios from Ryedale – her third year attending the AGM - asked McFarlane a question regarding their investments in fracking. This kind of shareholder engagement – educating and persuading decision makers at the Barclays AGM of the social and environmental risks of fracking – is a vital part of a diversity of tactics needed to put pressure on the big banks financing the climate crisis and achieve these vital victories.

This campaign is crucial because we know that we need to keep more than 80% of known fossil fuels in the ground to keep climate change below catastrophic levels. Financing new fossil fuel infrastructure like fracking when we should be urgently kickstarting a just transition to a renewable energy economy is the wrong direction. There cannot be any new fossil fuel infrastructure anywhere around the world. Although it is great that Barclays are ditching fracking, they’re still financing many other new fossil fuel projects. So, People & Planet are launching a new campaign to Divest Barclays from the flagship coal, oil and gas projects. These include the Dakota Access Pipeline (DAPL), the Cerrejon coal mine in Columbia, and Great Barrier Reef Coal & Gas Exports in Australia. Barclays are easily the worst high street bank in the fossil fuel financing business, so we are demanding that they withdraw project finance and corporate finance from these projects. We are demanding that Barclays ditch all fossil fuel finance.

People & Planet will launch the Divest Barclays campaign at the annual summer training – Power Shift: Training for Change. If you’re a student interested in challenging Barclays’ profiteering from the climate crisis – whether you’re a seasoned activist or never been to an action in your life – you should come along to get trained in creative actions and campaigning, and link up with other students from across the country who want to create the change necessary to resist the climate crisis.

Since I joined Sheffield People & Planet at the start of my time at University 3 years ago, I have seen the Fossil Free campaign go from strength to strength to become the fastest growing divestment movement in history! Now, over a third of UK universities have committed to divest. But divestment is just the beginning. Now it’s time to take the fight to the reckless banking sector and force them to cut their ties with the fossil fuel industry. It’s time to shift power from big business and elites to people who believe another world is possible.