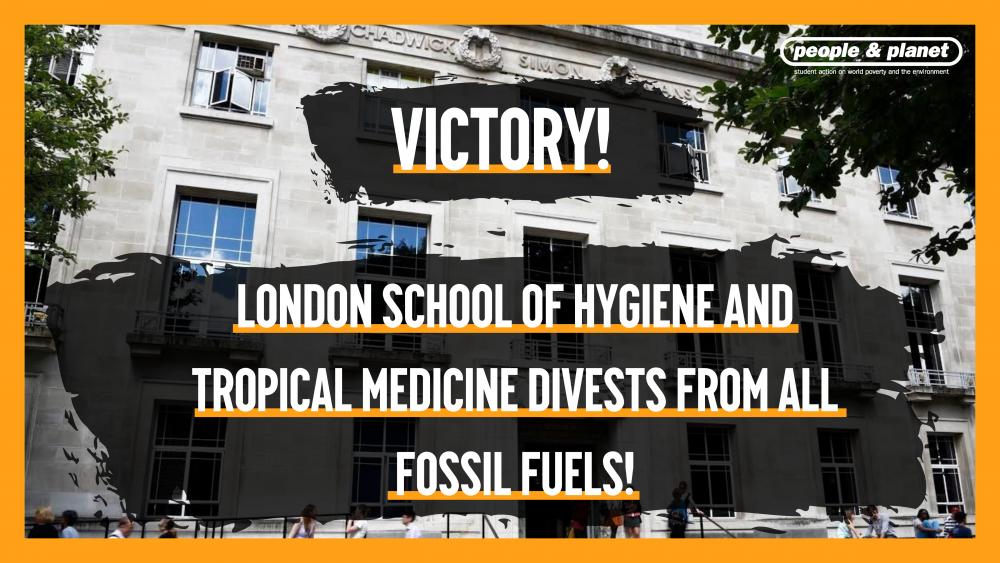 LSHTM’s announcement comes in the wake of a series of commitments from Oxbridge colleges. Over a period of eight days, from the 18th-26th February, the Cambridge Colleges of Pembroke and Trinity, and Oxford’s Somerville College made full divestment commitments. It is evident that full divestment from fossil fuel companies is now perceived as a common sense decision by the higher education sector.

With the City of London at the financial centre of the UK and fossil fuel extractor company offices being located within the city, the University of London has a responsibility to take seriously their proximity to these destructive business practices and take meaningful action.

Laura Clayson, Co-Director: Climate Campaigns at People & Planet said: “We are incredibly pleased that LSHTM has transformed its 2015 coal divestment commitment into a full one. However, this action is in opposition to the wider trend of their fellow University of London member institutions, who are behind the national curve in joining the fossil free divestment movement. As a federal university based in a city that prides itself on being world-leading, their failure to start work on undoing their complicity in the climate crisis is disgraceful. The University of London speaks of its proud “history of global engagement since its founding in 1836” but what does this mean without solidarity action with those on the frontlines of fossil fuel extraction and the climate crisis?”

An LSHTM spokesperson said: “LSHTM is a world leader in research on the health implications of climate change and policy responses. We are committed to improving our environmental sustainability, including through the holdings in our investment portfolio.”

Guillermo Lluch, Divest Birkbeck said: “LSHTM has had a crucial role in detecting, treating and preventing disease in its history, by divesting from fossil fuels not only does it show its commitment to a fairer and healthier planet, it also serves as an example to many other London universities, such as Birkbeck which continues to invest hundreds of thousands of pounds in fossil fuel companies. We have urged Birkbeck to pledge to forge a Green New Deal, to decarbonise and to divest from all its fossil fuel investments. Birkbeck too is proud of its heritage, we believe these investments contradict Birkbeck's ethos, it is time for Birkbeck to divest!”