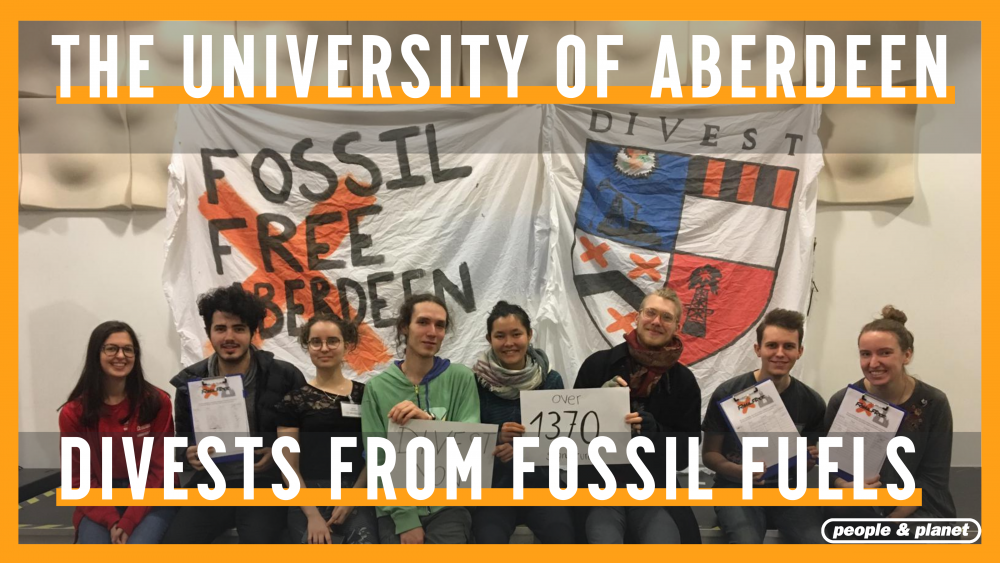 Today the University of Aberdeen announced that it will divest from all fossil fuels in what is seen as a hugely significant move by an institution at the heart of Europe's oil and gas capital.

A vote of the University’s Court on Wednesday 29th September committed the institution to excluding fossil fuel extractor companies from its £52.7 million investment portfolio by 2025. The University in Aberdeen is the 90th UK university to make a commitment to divest from fossil fuels.

75% of Scotland's universities have now made a decision to exclude fossil fuel extractor companies from their investments and nearly 60% of all universities in the UK have made some form of divestment commitment. Students at divested universities are now turning their attention to severing recruitment pathways from UK universities into oil, gas and mining companies.

The announcement comes after an 8-year long campaign from Aberdeen students in the People & Planet network, the UK’s largest student climate justice campaigns network. In the lead up to COP26 the announcement has placed increased scrutiny on the few remaining Scottish universities that have not yet divested, in particular, Aberdeen-based Robert Gordon University, which also has strong links to the fossil fuel industry.

The Aberdeen University Court voted in favour of the decision to divest, despite having voting members with links to the fossil fuel and energy sectors. They cited commitments to sustainable leadership and using their “unique position and influence to encourage and support the transition to the low carbon economy” in the region as reasons for the decision. They also highlighted that the decision was made to acknowledge the student voice, following discussions with Fossil Free Aberdeen and the Students’ Association.

In the local area, Aberdeen City Council has highlighted the need to centre a ‘green recovery’ with a heavy focus on combating climate change, with North Sea oil extraction having been detrimentally impacted by both collapsing oil prices and the COVID-19 pandemic. 81.7% of surveyed oil and gas workers indicated that they’d consider moving out of fossil fuel extraction, and over half  expressed that they would retrain in renewable energy if given the opportunity.

Laura Clayson, Campaign Manager: Climate Justice at People & Planet said: “We are deeply encouraged by this hugely significant announcement from the University of Aberdeen. It shows that no matter your context, it is possible to listen to the voices of students, prioritise a just transition that centres the needs of workers in the region and move away from the companies complicit in the climate crisis all at once. In this year of COP26, cutting links with the fossil fuel industry is as important as it’s ever been, representing a necessary act of support for the frontline and Indigenous communities demanding climate and social justice at the talks. We hope to witness the four Scottish universities that have yet to make an announcement do so, and in particular look forward to hearing from Robert Gordon University”.

Alisa Koester, Fossil Free Aberdeen and Student President of Aberdeen University Students’ Association said, "today’s announcement from the University of Aberdeen about divestment from all fossil fuels is a massive win for environmentalism, students and our planet. We know this is just the first step on a long road but we thank the University for taking it. Fighting to make our planet livable beyond now, should not be perceived as a radical position. It is a position of humanity to ensure that future generations of students can learn and expand their horizons like we have.  This wouldn’t have been possible without the voice and support of some incredible students, committees, societies and organisations, so thank you to everyone who was involved."

Kairin van Sweeden, SNP Common Weal organiser and a claimant in the Paid To Pollute court case against the UK government, and daughter of a Scottish oil worker said, "This is very, very positive news, especially for the young people of Aberdeen, many of whom are experiencing a great deal of anxiety with regards to the climate crisis, an anxiety which many politicians seem to be ignoring. Importantly, this decision acknowledges that the oil and gas industry has no long term future. Scottish people want investment shifted to the renewables industry, which they know will provide jobs now and sustain their communities in the long-term. The futile resistance to this comes from a handful of companies who seek to profit from every last drop of oil, whilst pushing all of us past safe climate limits. We must push them aside. It's time to follow Aberdeen university and divest from fossil fuels."

Rosemary Harris, Just Transition Advocacy Campaigner at Platform said, “"The decision from Aberdeen University to divest from fossil fuels is an incredibly welcome one, that takes us further towards a future free from fossil fuels. For an institute like Aberdeen University to have taken this step, in a city known as Europe's oil and gas capital, is not something to be taken lightly. The decision to divest should set an example to other institutions, and the UK government, that it is time to stop investing in fossil fuels and rapidly shift to renewable energy. As we transition away from fossil fuels, we need to ensure that it is worker-led. For a successful shift to renewables the government must harness the skills and experience of workers, including addressing skills gaps and duplication, investing in training funds and creating good, secure jobs through large-scale investment that prioritises workers and communities."

Caroline Rance, Climate and Energy Campaigner at Friends of the Earth Scotland said, "Aberdeen University's decision to stop investing in fossil fuels is a landmark moment in the transition away from North Sea oil and gas.  This is the first institution in Aberdeen to cut financial ties with the oil and gas industry, in the city which has historically been known as the 'oil capital of Europe'.

"Oil and gas is an important part of Aberdeen and Scotland's history, but it cannot be its future. The future now lies in a just transition to renewables and good green jobs, led by oil and gas workers and the communities in Aberdeen."