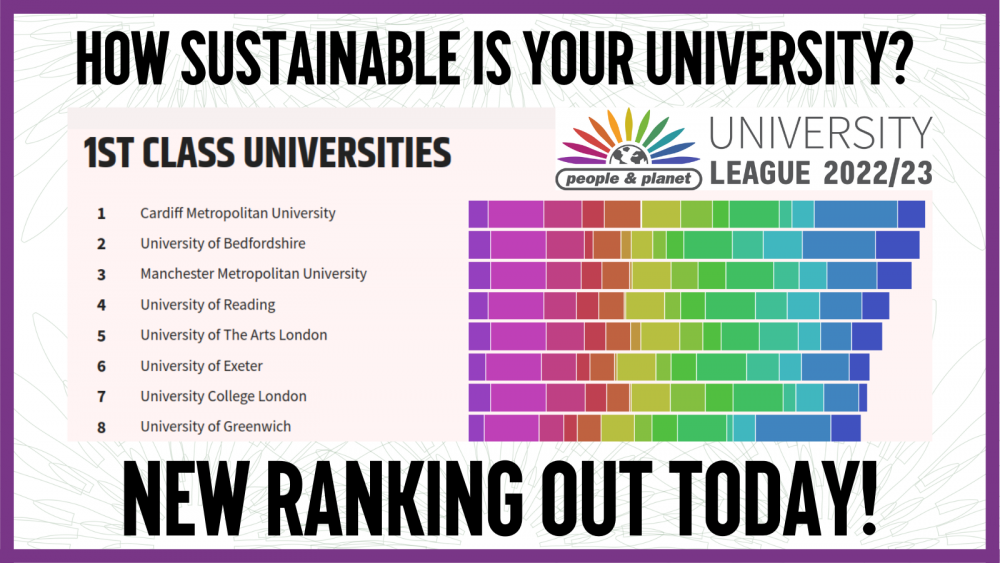 The 2022/23 People & Planet University League, which ranks 153 UK universities against sustainability and ethics criteria, shows the majority of the UK higher education sector has failed to reach its carbon reduction target. According to the most recent estates management record (EMR) from the Higher Education Statistics Agency (HESA), 59% of universities did not meet the sector-wide target of reducing carbon emissions directly controlled by the university by 43% between 2005/6 and 2020/21.

Cardiff Metropolitan University has topped the People & Planet University League for the first time, and is also the first Welsh university in the history of the League to finish in first place. Cardiff Metropolitan University has seen a rapid rise in its performance in recent years, jumping from 68th position in 2019 to 1st place with 82.3% overall in 2022. This can be attributed to outstanding performance in carbon reduction, with a 65% decrease in carbon emissions between 2005/6 and 2020/21, as well as the pioneering policy of becoming the first university in the UK to divest from the border industry.

The highest mover is the Royal College of Music, which rocketed 99 places from a fail last year to a 2:1 in 28th place this year. The Royal College of Music is also top of the new category of universities with fewer than 5000 students, proving that smaller and specialist higher education institutions can also excel when promoting sustainability and ethics.

Stranmillis University has finished bottom of the People & Planet University League 2022/23 with just 2.2% overall. The University of Sunderland has moved up 3 places to 3rd bottom after finishing last in 2021. The University of Osteopathy remains in second last position for the second year running.

There are three London universities in the top ten: University of the Arts London in 5th, University College London in 7th, and the University of Greenwich in 8th. The East of England, and Northern Ireland are the worst performing regional categories, with no universities meeting the carbon reduction target, or scoring above a 2:2 award class.

Sustainability and Ethics Statistics
4 Universities have made a groundbreaking commitment to end recruitment pipelines to the fossil fuel industry: Birkbeck, University London was the first university in the UK to adopt such a policy, followed by Glyndŵr University, the University of Bedfordshire and University of the Arts London.

The higher education sector recently passed a landmark achievement of 100 UK universities making a declaration to divest from fossil fuels. Following this achievement, there is still work to be done: Just ⅓ of universities have a commitment to fully screen out all divestment in fossil fuels written into institutional policy; just 7% have a commitment in policy to reinvest in community-owned renewable energy projects on campus.

Following the Universities and Colleges Union (UCU) strikes over pay and conditions, our research found only 36% universities are accredited Living Wage Employers, and half of universities have more than a quarter of their staff on fixed-term contracts, showing the extent of precarity in the sector.

J Clarke, Co-Director of Climate Campaigns at People & Planet said:
'With significant movement in the 2022/23 People & Planet University League ranking it is clear that complacency is not an option for institutions seeking to perform well on ethics and sustainability criteria. One key area that UK universities must take action on is ending recruitment relationships with oil, gas and mining companies, highlighted by only 3% of the sector having implemented such policies in the year’s ranking. It is vital that we end the recruitment pipeline into the industries most responsible for the climate crisis, and universities meet that challenge urgently.'

Jack Ruane, University League Manager at People & Planet said:
‘In 2010 the Higher Education Funding Council for England (HEFCE), Universities UK (UUK), and Guild Higher Education (Guild HE) set out a target of a 43% reduction in carbon emissions by 2020/21 from a 2005/6 baseline, which was also incorporated into the People & Planet University League assessment criteria. It is disappointing to see that 59% of the UK universities have failed to achieve this. This highlights the importance of holding the sector accountable via short-term assessments of actual reductions in carbon emissions, rather than celebrating net zero target-setting, which are often vague on how offsetting will be achieved.’

Laura Clayson, Climate Campaigns Manager said:
'Despite 100 UK universities having now publicly announced the exclusion of fossil fuel companies from their investment portfolios, just 60 have enshrined this commitment in a valid policy document. Concerningly, this is a significant drop from 76 last year. This - coupled with a sector where only 28% of universities publicly list their investment holdings - displays the importance of the People & Planet University League as an annual accountability mechanism. Severing investment ties with the fossil fuel industry is an important first step for universities to act upon their responsibility to communities on the frontlines of the climate crisis and fossil fuel extraction impacts. We hope to see a sharp increase in policy exclusions in next year’s League in line with this.'

Eva Spiekermann. Co-Director Migrant Justice and Movement Building said:
‘It is brilliant to see Cardiff Metropolitan University ranking first in this year’s People & Planet University League. The first UK university to pass a pioneering policy to align its’ ethical investments approach with immigration justice and commit to never invest in the border industry, Cardiff Metropolitan sets a strong precedent for others to follow by taking proactive steps to address one of the most defining issues of our times; migration. Divestment from the unethical border industry is crucial, considering the extent to which this industry is implicated in the violence and human rights abuses towards people migrating and seeking safety across the world.’

(1) People & Planet is the largest student network in the UK campaigning for social and environmental justice. We envision a future in which spiraling inequality, instability, climate crisis and resource depletion are reversed, and a world in which the balance of power in society has fundamentally shifted to an equal world that benefits all of us. Our mission is to build an empowered generation of change-makers who are equipped with life-long skills, motivation and networks to be a force for change in achieving a more equitable and sustainable world.

(3) The 2022/23 People & Planet University League was researched by a team of trained student and recent graduate volunteers between July-August 2022.

(4) Universities had to demonstrate evidence of fulfilling the criteria in the 2021/22 academic year.

(5) All information aside from HESA EMR data, had to be publicly available on the university website at the time of data collection, between July-August 2022.

(6) At 7am on Tuesday the 6th of December the full People & Planet University League ranking will go live at this address: https://peopleandplanet.org/university-league

(7) For additional quotes on precarity in higher education, feel free to contact Jane Thompson, Bargaining and Negotiations Official at the Universities and Colleges Union JThompson@UCU.ORG.UK