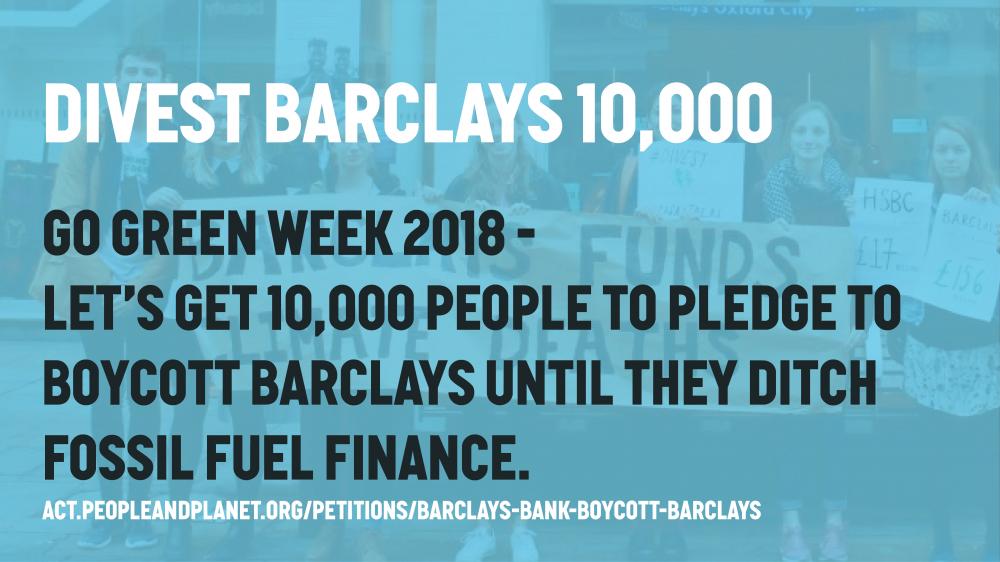 2017 was an incredible year for the global fossil free movement! In 2018, together we’re going to take it to the next level.
How about some New Years Revolutions* for transforming the face of global finance by taking the fossil free fight to the banking industry this year?

Join People & Planet students in organising for Students' Unions, universities and organisations and businesses in our communities to boycott Barclays until they ditch all fossil fuel finance.
Sign up here!

2. Pass a motion through your SU

Students' Unions are great resources to support grassroots campaigns and display our collective power. Pass a motion for your SU to boycott Barclays and support your campaign using this template.

February 12th-16th 2018 will see students, SUs and universities across the country take part in Go Green Week. Host any of our events on campus including a discounted film screening, webinars on  front lines solidarity and introducing Divest Barclays, and workshops on escalating our campaigns.

2017 saw the beginning of a wave of actions targeting Barclays branches demanding they ditch fossil fuel finance including investment in projects like fracking and the Dakota Access Pipeline.
Join us to escalate the rolling disruption in 2018 - let us know if you're up for organising an action in your community or campus.

We want 10,000 people to pledge to boycott Barclays until they ditch fossil fuel finance by the end of Go Green Week.
SIGN & SHARE the petition to add your voice to thousands calling for fossil free finance in 2018.

Over one third of UK universities now have some kind of divestment commitment and 2018 will be the year we push it over one half!

Beyond the student world, we’ve seen divestment dragged into the mainstream of politics and finance with commitments to ditch fossil fuels coming from Norway, the Catholic Church, over 100 MPs and a recent exodus of banks and insurance companies from coal and tar sands especially.

In 2018 we’re taking the fight to banks and the finance industry too, starting with Barclays – the worst UK high street bank for fossil fuel finance.

Join us by committing to our 5 New Years Revolutions* and don't forget to pledge to boycott Barclays yourself until they ditch fossil fuel finance.